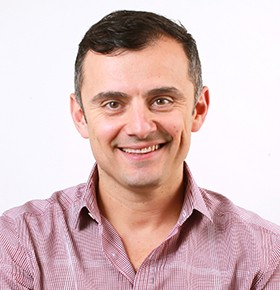 Business speaker, best selling author and internet personality Gary Vaynerchuk is a born entrepeneur.  Starting by taking control of his father’s New Jersey liquor store in 1998, Gary is the creator of Wine Library. Wine Library expanded into a $60 million wine blog on YouTube by 2005. As a result, Gary became one of the first people to build a lucrative social media brand. Founding VaynerMedia in 2009, and Trace under his holding company, VaynerX, Gary is certainly a first wave social media expert.

Eager to help others replicate his success, Gary shares through his top 100 global podcast, #AskGaryVee. Vaynerchuk has made celebrity appearances on popular television programs to discuss his career and been featured in written publications. These include Late Night with Conan O’Brian, The New York Times Newspaper, GQ magazine and Time magazine. A passionate business speaker, he has also given over 50 keynotes at major conferences in 2017. This includes Real Talk Summit, EntreCon, and Expert Empires.

This year, Gary has been on a keynote tour in Australia. He has spoken at the National Achievers Congress Conference and the Business Squared Keynote, part of his own live broadcast, Success Squared. The National Achievers Congress is conference spanning twelve countries, hosted by Success Resources. Also in association with Success Resources, Success Squared is team of speakers meant to tour through Australia. Melbourne, Sydney, Brisbane, and Auckland are all on the itinerary, with two events in Melbourne.

Most notably, Gary is the chairman of Vayner Media, a social media consulting agency that has helped build the digital brands and reputations of powerhouse companies. GE, Pepsi, The New York Jets, and the Brooklyn Nets are just a few. Additionally, within VaynerX, Gary Vaynerchuk has created Pure Wow. Pure Wow is a popular women’s lifestyle publication making $20 million in revenue annually by 2016. Most recently introduced to VaynerX is data reporting software company, Tracer, which Vayner uses within his own businesses. Now marketed to other agencies, Tracer has consequently grown to need nineteen of it’s own employees. Juggling several hats, Vayner is also co-founder of  Vayner Sports. The agency is known to represent athletes like New York Jets linebacker, Josh Martin and Greenbay Packers wide receiver, Geronimo Allison.

Also a New York Times Best Selling author, Gary released his sixth book this year, Crushing It!: How Great Entrepreneurs Build Their Businesses and Influence- and How You Can, Too. His book, Crush It, urged people to find what they were passionate about and take to the internet to make money from that passion. He outlines ways to build your digital brand and other web marketing tips. His third book, The Thank You Economy calls for companies to be willing and ready to adapt to changes in the internet era. Both peaked at #2 on the New York Times Advice bestseller list. Similarly, Jab, Jab, Jab, Right Hook is all about planning your social media marketing strategy and landing the punch that will take your business to the next level.