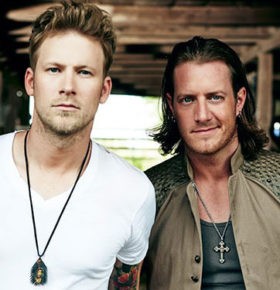 The American Country music duo and celebrity speakers Florida Georgia Line ,made up of Brian Kelley and Tyler Hubbard, won the 2013 American Music Award for single of the year with their biggest hit song to date titled Cruise. The song features a remix by hip-hop music artist Nelly and is the best selling-song by a country duo ever in digital history selling over 6 million copies. The tandem are emerging as some of country’s new stars and have made appearances on Chelsea Lately, Late Night with Jimmy Fallon, and a performance at the 2013 Macy’s Thanksgiving Day Parade.

Celebrity Speakers Brian from Ormand Beach, Florida and Tyler from Monroe, Georgia met in college at Belmont University and joined talents to begin playing at local bars and venues in Nashville. Their first EP entitled Anything Like Me contained 6 songs all written and performed by the duo released in 2010. 2 years later, the song Black Tears off the EP was performed by fellow country star Jason Aldean on his official album Night Train and gained the duo notoriety. Their second EP It’z Just What We Do contained the aforementioned hit song Cruise that really introduced the duo to the public and produced 2 Country Music Association awards for Single of the Year and Vocal Duo of the Year in 2013.

The duo’s first official studio album Here’s to the Good Times released in 2012 and produced 3 chart-topping country hits including the Nelly remix to Cruise, Get Your Shine and Round Here. A deluxe version of the album was released in November of 2013 and featured a collaboration with Luke Bryan. Brian and Tyler have also traveled the states as an opening act with Luke Bryan’s Dirt road Diaries tour. Their second album, Anything Goes, was released in October 2014. The charismatic duo hopes to generate their own tour eventually which could come to fruition in the near future after their recent success.