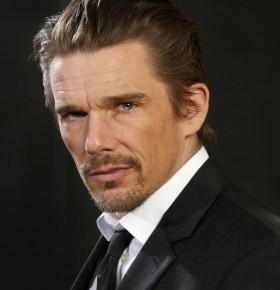 Celebrity Speakers Bureau presents actor Ethan Hawke a well-respected member of Hollywood’s elite after his work in a number of impactful films in the last few decades and current celebrity speaker. Ethan was cast as a lead in the monumental film Dead Poets Society that debuted in 1989 and also starred the late Robin Williams. The film would be the first of many lead roles for Ethan on his way to 4 Academy Award nominations and a hugely successful career in the film industry. In 2015, he was nominated for his most recent Academy Award for his performance in Richard Linklater’s coming-of-age drama, Boyhood. The film was shot over the course of 12 years and allowed Ethan to portray a character similar to his real life role as a caring father to his children. Ethan is a down-home, family man as evident when he recently celebrated his Oscar nomination at a local café in Brooklyn with his family the following day after the Academy Awards.

Dead Poets Society would be the first of many lead roles to come in the 1990’s for Celebrity Speaker Ethan. He starred opposite Winona Ryder in Reality Bites and acted in his first film for Richard Linklater in the 1995 romantic drama, Before Sunrise. He would go on to star in the film’s sequels Before Sunset and Before Midnight. In 1998, Ethan starred in the sci-fi movie, Gattaca alongside his future first wife, Uma Thurman. His most notable films to date also include Training Day co-starring Denzel Washington, Assault on Precinct 13, Before The Devil Knows You’re Dead and The Purge which released in 2013.

Off-screen Ethan has written 2 novels, The Hottest State and Ash Wednesday. Ash Wednesday even made the New York Times Bestseller list in 2002. He is an active philanthropist, supporting the Human Rights Campaign, Habitat for Humanity, and the Doe Fund which helps the homeless obtain housing and employment.