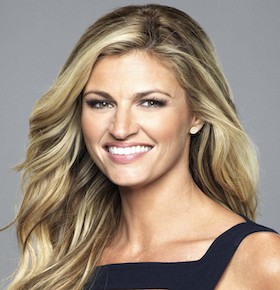 Celebrity speaker Erin Andrews is an American sportscaster and TV personality currently working as the host of Fox College Football studio show and a co-host of ABC’s hit dancing competition series Dancing with the Stars. Erin gained publicity after becoming a prominent on-field reporter on ESPN’s College Gameday and has been a guest on numerous talk shows including The Oprah Winfrey Show, Jimmy Kimmel Live and The Tonight Show with Jay Leno.

Erin graduated from the University of Florida in 2000 with a bachelor’s degree in Telecommunications. She began her career as a freelance reporter for Fox Sports Florida and would work her way to Turner South network to become a studio host and reporter for Atlanta Braves, Atlanta Thrashers, and Atlanta Hawks games. She signed on with ESPN in 2004 as a reporter for ESPN National Hockey Night and as a sideline reporter for college football and basketball games. While at the network she covered events from the College and Little League World Series, to ESPN and ABC’s live coverage of the Scripps National spelling Bee. From 2010-2011 she also served as a correspondent for Good Morning America before she moved to Fox in June of 2012. While hosting Fox College Football Saturday Erin also acts as leading sideline reporter for all major sporting events including the World Series, Super Bowl, and the Daytona 500.

Before becoming the host of the ABC show, Erin appeared on the 10th season of Dancing with the Stars and placed 3rd with partner Maksim Chmerkovskiy. Throughout her career in TV she has made time for many philanthropic endeavors including acting as spokesperson for Kraft Foods Huddle to Fight Hunger campaign in partnership with the Feeding America non-profit organization initiative. She was also the host of the Country Music Television Disaster Relief Concert to raise money for the American Red Cross and their efforts to help those in need after a vicious cycle of tornadoes hit the Southeastern United States in April of 2011.