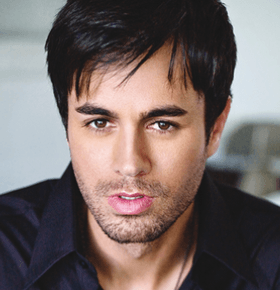 Enrique Iglesias is a popular Spanish-American singer and songwriter who burst onto the Latin American music scene in the mid 1990’s and thrust him into the American music spotlight. With over 137 million records sold world wide, Enrique is one of the best selling Latin artists ever.

Celebrity Speaker Enrique grew up in Miami and was determined to prove his worth in the music world aside from his father and signed to his first record label after using a fake name. He released his own self-titled first album in 1995 which became an instant hit in Latin American markets, selling half a million copies in its first week. After the release Enrique was recognized with a Grammy Award for Best Latin Pop Performance of the year. His next two albums Vivir and Cosas Del Amor solidified his place as a star in the Latin music scene, and his world tour to promote Vivir visited 16 countries including close to 20 U.S. dates. The small tour accompanying his Cosas Del Amor album was the first concert ever to be sponsored by McDonald’s. In 1999 his single Bailamos reached #1 on the U.S. charts and lead to the completion of his first full all-English album Enrique. After the release of his second all-English album Escape containing the hits Escape, Don’t Turn Off the Lights, and Hero, Enrique became a household name in American pop music and signed a large advertisement deal with PepsiCo which utilized his songs and saw him appear in multiple TV commercials. In the early 2000’s he also did advertisements for Doritos chips and his own Tommy Hilfiger cologne. Ha has had five Billboard Hot 100 top five singles, 2 number-ones and 14 number-one songs on Billboard’s Dance charts.

Enrique has recorded a total of 10 official albums. He has solidified himself as one of the greatest modern Latin-American crossover artists of all-time alongside the likes of Ricky Martin, Carlos Santana, and Jennifer Lopez.