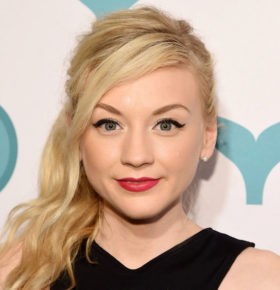 Professional Speaker Emily Kinney is best known for portraying the role of Beth Greene on AMC’s The Walking Dead. But the TV screen isn’t the only big stage she can rock! Emily is also a dedicated pop singer/songwriter whose second studio album This is War releases in the spring of 2015.

Emily is not one of those actresses that got an early start in the entertainment industry. It wasn’t until 2006 after she graduated from Nebraska Wesleyan University that she packed up her things and moved to New York City to pursue her dream of becoming an actress. At 23, she began acting on Broadway with her first role as a schoolgirl named Anna in the rock musical Spring Awakening. She continued to follow the Broadway route to superstardom, playing Jean Fordham in August: Osage County’s National Tour in 2009. The breakthrough came after she first appeared on television as a reoccurring cast member on Showtime’s The Big C. Playing the role of a young girl of the same name, Emily was a classmate of one of the main characters in the show’s second season.

Her last roles before snagging a spot on The Walking Dead included a string of guest roles on films and TV series such as Law and Order: Criminal Intent and the film Aunt Tigress. In 2011, she accepted her recurring role as Beth Greene beginning in season 2 of The Walking Dead. By season 5 she had become a fan favorite on the show and her music career benefitted from this new influx of fans. It was during the midseason finale of season 5 that her character lost her life at the hands of a rival group. Emily was featured on The Walking Dead’s soundtrack album with co-star Lauren Cohan and their song “The Parting Glass” was featured in an episode of season 3.

Following her days on The Walking Dead, Emily has had ample time to focus on her music career. She has two EP’s titled The Blue Toothbrush and Expired Love and her latest single, Rockstar, was released in December of 2014. Emily has recently been featured in Rolling Stone, Refinery29, People, Entertainment Weekly, Spin, Relix Magazine, American Songwriter, Fuse, and more. Emily’s sweet, down-to-earth personality makes her a great candidate for speaking engagements because she’s so approachable.

She is a Professional Speaker available for personal appearances and corporate events as well as speaking engagements.