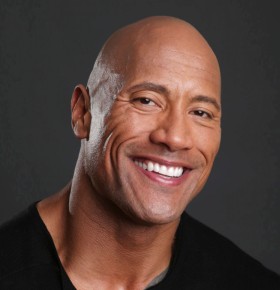 Celebrity Speaker for hire Dwayne “The Rock” Johnson is a true jack of all trades. From renowned athlete to American Academy winning actor and New York Times bestselling author of his book The Rock Says…, Celebrity Speaker Dwayne has it all down. After playing on a full football scholarship for the University of Miami as a defensive tackle, Motivational speaker for hire Dwayne couldn’t stay away from the wrestling ring. You could say it was in its genes—The Rock is a third generation wrestler and numerous uncles, cousins, and relatives all wrestled; his father and professional wrestler Rocky Johnson also served as his trainer. During his 1996-2004 career, celebrity speaker Dwayne Johnson had seventeen championship reigns and holds the record for most WWF Championship wins.

Now widely considered one of the all-time greatest wrestlers, speaker for hire Dwayne Johnson has found just as much success on the big screen as he did in the ring—with $1.3 billion in earnings for 2013, The Rock was named the top-grossing actor of 2013 by Forbes. His debut as Luke Hobbes in the fifth film of The Fast and the Furious franchise, which co-stars Vin Diesel, Michelle Rodriguez, Jordana Brewster, Tyrese Gibson, and Sung Kang, led to subsequent reprisals of the role in the following Fast and Furious movies (6 and 7). From Race to Witch Mountain and the Game Plan to Hercules and The Mummy Returns, The Rock can do it all—adventure, comedy, action, and even science fiction. Additionally, he has hosted Saturday Night Live on more than one occasion. Dwayne’s latest work has been starring in the new HBO series Ballers, which debuted in June 2015.

DWAYNE JOHNSON BOOKINGS AND ENDORSEMENTS: Celebrity speaker for hire Dwayne Johnson has booked a multitude of endorsement deals. He has made over $70 Million in endorsement deals and bookings alone. Johnson has been hired by companies such as Apple, Droga5, Ford, Got Milk, and Under Armour to promote their products.

The Dwayne Johnson Foundation was founded in 2006 to provide assistance to terminally ill and at-risk children, and Dwayne also made a generous donation to his alma mater, the University of Miami, in 2007. Besides being good friends with Arnold Schwarzenegger, the wrestler turned actor is active politically; he appeared at both the 2000 Democratic and Republic National Conventions, making a speech at the latter, and participated in the WWE’s Smackdown Your Vote campaign. Luckily, Dwayne’s myriad of accomplishments have not gone unnoticed—because of his Samoan roots on his maternal side, Dwayne was bestowed with the honorable title of Seiuli, and he also received The Horizon Award from Congress in 2008.

WORK WITH DWAYNE JOHNSON: Would your organization like to hire motivational speaker Dwayne Johnson for an endorsement, public relations campaign, or one of a kind appearance at your next conference or special event? Contact Celebrity Speakers Bureau today to hire Dwayne Johnson or another great celebrity speaker via email at booking@celebrityspeakersbureau.com .