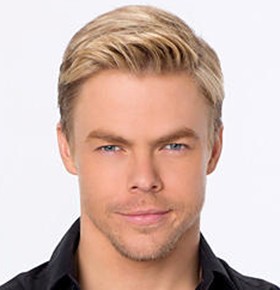 Reality TV Speaker Derek Hough is an American dancer and choreographer who has been praised for his work on the ABC dance competition series Dancing with the Stars. Derek is also responsible for helping choreograph the ice dancing routine of 2014 Olympic Gold Medalists Meryl Davis and Charlie White. Derek is a 5-time winner of Dancing with the Stars and his sister Julianne Hough has also won multiple seasons of the hit dance show. During his stint on the show from 2007-2013, Derek received 5 Creative Arts Primetime Emmy Awards and won the 2013 Emmy Award for Outstanding Choreography.

Reality TV Speaker Derek grew up in a family of talented ballroom dancers and traveled to London at just 12 years old to live and study the art of dance with competitive ballroom dancing legends Corky and Shirley Ballas. Derek also worked alongside sister Julianne and the Ballas son Mark all of whom are now prominent figures on Dancing with the Stars. He spent 10 years in London while studying and eventually teaching at the Italia Conti Academy of Theater Arts. He made his first appearance on Dancing with the Stars as a guest instructor for his sister and partner Apolo Anton Ohno who eventually won the season. He signed on as a full time instructor for the next season in the Fall of 2007 and was partnered with actress Jennie Garth. 2 seasons later Derek would win the first of his 5 Mirror Ball Trophies with partner and eventual judge of the show Brooke Burke. His other season wins have come partnered with singer Nicole Scherzinger, actress Jennifer Grey, singer Kellie Pickler and most recently in September of 2013 with Glee star Amber Riley.

Reality TV Speaker Derek has set major records on the hit dance show including having won the most Mirror Ball Trophies by any instructor in the history of the show as well as the only professional dancer to earn a perfect 10 with each of his celebrity partners. Derek also works for ABC as the host of their new show Family Dance Off and his first book Breakthrough Moments: Lessons from a Life in Motion, released in 2014.