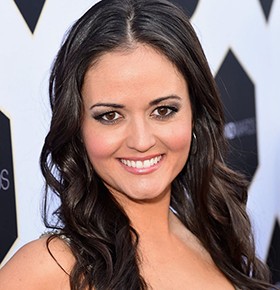 Celebrity Speaker Danica McKellar is a popular actress and author who was made famous by her portrayal of Winnie Cooper on the ABC comedy drama The Wonder Years from 1988-1993. As an active advocate for education, Danica has written 4 non-fiction books with the hopes of encouraging middle school and high school girls to strive for success in mathematics. The multi-faceted star also began a YouTube video series called Math Bites that reviews a many subjects involving mathematics, and has her own yoga and meditation DVD to help people maintain a healthy lifestyle. Danica was a cast member on the exciting ABC dance competition series Dancing with the Stars partnered with Valentin Chmerkovskiy. Danica is an example of an actress who does not let her Hollywood work define her, but rather what she is doing to help others.

From 1988-1993, Celebrity Speaker Danica McKellar’s main role as Winnie in 6 seasons on The Wonder Years transformed her into a pop culture icon. Her acting career after the hit show took on many made-for-TV movie roles and a recurring role in the political drama The West Wing. She is also credited with a host of voice over roles including Miss Martian in the TV series Young Justice, and the Invisible Woman in the Marvel: ultimate Alliance 2 video game in 2009. She was featured in a 2013 Avril Lavigne music video reprising her role as the young Winnie Cooper for the song Rock N Roll.

Her first book Math Doesn’t Suck: How to Survive Middle-School Math without Losing Your Mind or Breaking a Nail released in 2008 began her work to better the views of young girls on math and the importance of a good education. Her books, coupled with her daily blog and appearances as an advocate for education earned her the Joint Policy Board for Mathematics (JPBM) Communications Award awarded in early 2014. As a part of the Math-a-thon charity campaign, Danica helps kids enjoy math while raising money for the St. Jude Children’s Research Hospital.