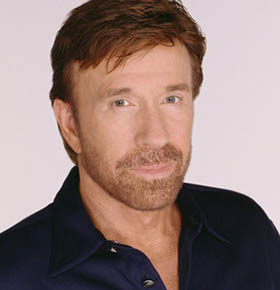 Martial arts master, actor, celebrity spokesperson and keynote speaker for hire Chuck Norris is a true American icon. He rose to fame as a martial arts champion and went on to star in the hit CBS TV series Walker, Texas Ranger as well as a number of films including Missing in Action, Code of Silence and The Delta Force. Many may also recognize him as the face of the Total Gym brand, appearing in countless infomercials and advertisements for the brand alongside actress Christie Brinkley. His longstanding career in entertainment has now made him one of the most popular celebrity keynote speakers requested for corporate conferences and special events.

Chuck first learned the art of Tang Soo Do while serving as a part of the United States Air Force in North Korea. The teachings of Tang Soo Do earned Chuck numerous black belts and eventually served as the basis for his own style of martial arts, Chun Kuk Do. Upon being discharged from the Air Force, Chuck opened a series of karate schools including one in his then hometown of Torrance, California. During this time, he also competed in and won karate tournaments holding the title of Professional Middleweight Karate champion for 6 straight years. In 1990, he made history when he became the first Westerner in the history of Tae Kwon Do to be awarded the rank of 8th Degree Black Belt Grand Master.

Chuck’s bad-ass persona helped earned him small roles in feature films and TV shows that eventually led to starring roles later in his career. He made his acting debut in Dean Martin’s 1969 film The Wrecking Crew and followed it up with a role as Bruce Lee’s nemesis in Return of the Dragon. His first starring roles came in Breaker! Breaker! and Good Guys Wear Black in 1977 and 1978 respectively. He spent most of the 80’s starring in action movies for Cannon Films. In 1993, Chuck was cast as the lead role in Walker, Texas Ranger. The show spanned 203 total episodes across 8 ½ years and is still in syndication today.

Chuck is a devout Christian who has also donated his time to philanthropic efforts including his own non-profit organization called Kickstart Kids. The organization aims to build strong moral character in today’s youth through martial arts training. In 2005, he founded the World Combat League which donates a portion of the proceeds to Kickstart Kids. Chuck has also worked extensively with various military non-profits benefiting and supporting U.S. veterans.

Would your organization like to hire Chuck Norris to speak or make a personal appearance at your next event? Contact Celebrity Speakers Bureau today to hire Chuck Norris or another top keynote speaker to entertain and engage your audience at an upcoming corporate conference, speaker series, trade show or special event.