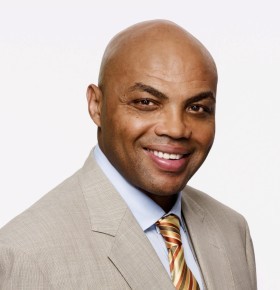 After a 16-year Hall of Fame career in the NBA, Sports Motivational Speaker Charles Barkley traded in his basketball jersey for a suit and tie in the summer of 2000 to become one of today’s most popular basketball analysts and personalities.

Charles’ colorful career in the NBA included 10 NBA All-Star appearances and 5 nominations to the All-NBA first team. He currently works as an analyst on TNT’s 5-time Emmy Award-winning post-game show, Inside the NBA, with Ernie Johnson, Kenny Smith, and Shaquille O’Neal. In 2002, Charles released his memoir, I May be Wrong but I Doubt It, recounting his career in the league.

Charles started out as a center for Auburn University, earning a reputation as a fan favorite with his incredible skills and showmanship during his 1981 to 1984 career. After finishing his third season at Auburn, Charles enlisted in the 1984 NBA Draft and was picked up by the Philadelphia 76ers, where he quickly became a starting power forward.

The Sporting News and Basketball Weekly recognized Charles as Player of the Year during the 1989-90 season, despite Magic Johnson taking home the esteemed Most Valuable Player award. Charles also worked with Nike to release his own signature shoe line. After a remarkable eight-season run in Philadelphia, Charles was traded to the Phoenix Suns.

During his first season after being traded, Charles received the MVP award and played in his seventh consecutive NBA All-Star game. Charles became a rather decorated basketball player while hitting the court for the Phoenix Suns, earning All-NBA and All-Star nominations in each of his four seasons. After the 1995-96 season, Charles played in his tenth consecutive All-Star game before being traded to the Houston Rockets, where he suffered multiple injuries during his four season stint before promptly retiring from the court.

As an iconic basketball player, Charles has earned the respect of countless opponents, fans, and young up-and-comers. In 1996, Charles spoke out about athletes receiving excessive recognition in society, saying that basketball players need to realize that so many kids look up to them as role models and should conduct themselves accordingly to set better examples.