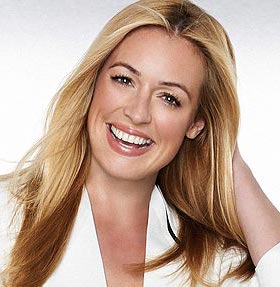 Celebrity Speaker Cat Deeley appears every week on the popular television show So You Think You Can Dance (SYTYCD) and has somehow made it past every elimination since 2006, but that’s because Cat is more likely to be wearing four inch heels rather than tap shoes—she’s the host, not a competitor. Even though she admits to not being much of a dancer, Cat nonetheless is just as popular with television audiences as the dancers themselves just for being her bubbly self, who isn’t afraid to laugh good naturedly if she drops the microphone or accidently misses a beat in one of her lines. Her wit and charm have earned her three Emmy nominations for Outstanding Host for a Reality or Reality-Competition Program in 2011, 2012, and 2013, and she has also received a 2014 Critics’ Choice Television Award nomination for Best Reality Host.

Before she began hosting SYTYCD, Cat was discovered by an agency at the age of sixteen and became a full-time fashion model before transitioning to hosting. In addition to the popular dancing show, Cat has appeared on NBC’s The Tonight Show and CNN’s Icon with Nancy Cartwright; additionally she covered the highly televised Royal Wedding between Kate Middleton and Prince William in 2011. She has also filled the shoes of vacationing talk show hosts like Kelly Ripa on Live with Regis and Kelly and Meredith Vieira on Today.

These days you are more likely to see the English actress playing a fraudulent medium on the new Hulu series Deadbeat. Cat’s fans are in for a shock to see the amiable blonde go from a personable television personality to the villain, but this just speaks to her versatility and array of talents, as acting in a non-live show is a first for Cat. She has also guest starred as herself in The Simpsons in 2015. Being an active supporter and UK Ambassador for UNICEF, Cat is intimately involved in many of their projects, such as Soccer Aid.