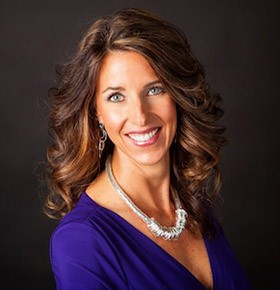 Motivational military speaker and former U.S. Navy Lieutenant for hire Carey Lohrenz is one of the most iconic female pilots in U.S. military history. She is credited as the first fully qualified female pilot to fly the F-14 Tomcat for the United States military. Now retired from the military, Carey travels the country sharing her insights into what it takes to be a great leader and increasing team performance as a keynote speaker for Fortune 100 companies and organizations from a variety of industries. She is also the author of Fearless Leadership: High-Performance Lessons from the Flight Deck published in 2014.

Carey grew up in Wisconsin and is the daughter of a former U.S. Marine Corps pilot. The apple did not fall far from the tree! Exceptionally athletic, she was a 3-time varsity letter winner in rowing during her undergraduate studies at the University of Wisconsin. She then went on to enroll in Aviation Officer Candidate School in Pensacola, Florida. She completed flight school at Naval Air Station in Corpus Christi, Texas, and then advanced jet training at Naval Air Station in Kingsville, Texas. In 1993, she officially earned her wings. As a lieutenant in the U.S. Navy, Carey flew a number of missions worldwide as a combat pilot.

In 1999, she retired from the military to pursue a career as a leadership expert and motivational speaker. Her experiences as a naval fighter pilot have given her keen insights into what it takes to perform under pressure in uncertain environments, reduce errors in crunch time and overcome whatever obstacles come your way.