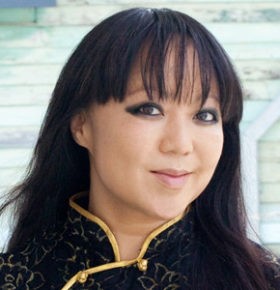 Urban space artist And Motivational Speaker Candy Chang is a celebrated visionary who has helped inspire positive change and interaction in communities all over the world. Candy creates public installations that bring communities together and allow individuals to feel comfortable enough to voice their dreams and concerns for their society. Her now famous Before I Die public art project encourages the public to come together to write and share their dreams and aspirations on a giant chalkboard wall. The Before I Die wall concept has been recreated in over 70 countries and 1,000 cities worldwide. In 2015, Motivational Speaker Candy Chang was hired as a featured keynote speaker for the Texas Conference for Women with Robin Roberts and Patricia Arquette.

Motivational Speaker Candy Chang received her Masters in urban planning from Columbia University following her studies in graphic design and architecture at the University of Michigan. She’s used this unique skill set to examine the human condition on a personal level through public art projects in New Orleans, New York, Nairobi, Helsinki, Vancouver and Johannesburg. Some of her techniques include post-it notes on vacant buildings asking individuals to write what they want the new store to be to fill-in-the-blank sentences asking the public to fill in their own unique answers. What Candy and many others have found through these public art installations is a greater sense of hope for the future and a comforting feeling of togetherness in our pursuit of a meaningful life.

In 2012, Motivational Speaker Candy Chang was a featured keynote speaker at a TED Conference in Edinburgh, Scotland. She is now a TED Senior Fellow and an official TEDx Organizer for new TED Conferences each year. In the past she has been hired as a keynote speaker for events such as the American Planning Association National Conference, the Global Health Summit and the Creativity World Forum.

Motivational Speaker Candy Chang is an inspirational keynote speaker on a mission to explore the human condition through public displays of ideas and emotions.