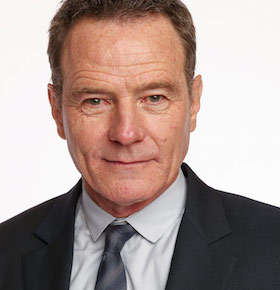 Bryan Cranston is a multiple award winning actor, screenwriter, director and producer who recently played the role of Walter White in arguably one of the greatest television series of all time, AMC’s Breaking Bad. His performance in the show earned him 3 Emmy Awards for outstanding lead actor in a drama series, several Screen Actors Guild Awards, and recently the 2014 Golden Globe for best actor in a TV series drama. Bryan helped raise over $1.8 million in an event to watch the season finale with a few lucky fans to benefit the Kind Campaign against girl-on-girl bullying, a charity started by the wife of co-star Aaron Paul.

Before his impressive role in Breaking Bad, Celebrity Speaker Bryan was widely recognized as Hal, the father in FOX’s award winning TV series Malcolm in the Middle which aired from 2000-2006. Bryan is credited with directing multiple episodes of the Malcolm in the Middle series and became a producer of Breaking Bad in 2011, also directing 3 episodes of the series. He is also responsible for directing 2 episodes of the ABC’s award-winning comedy series Modern Family.He has made cameo and voice appearances in other popular TV shows including Family Guy, How I Met Your Mother, and Jerry Seinfeld’s dentist on the NBC hit series Seinfeld. The ABC Family miniseries Fallen, based on the four-book series of novels by Thomas Sniegoski, featured Bryan as Lucifer. Other major voice-over roles Bryan has been featured in include Madagascar 3: Europe’s Most Wanted, the Adult Swim comedy series Robot Chicken, and the FX series Archer.

Bryan has enjoyed acting roles in many popular movies including Saving Private Ryan, Drive, and Ben Affleck’s award-winning film, Argo. He also appeared as host of NBC’s popular late night skit show Saturday Night Live with award winning hop-hop icon Kanye West in 2010. In 2013, Bryan played Lyndon B. Johnson in the production of All the Way and it was announced in 2014 that he would star in the HBO adaption of the play.