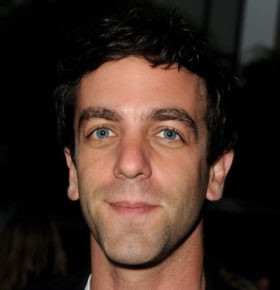 B.J. Novak is a well-known American actor, stand-up comedian, screenwriter, director, and celebrity speaker who has appeared in a host of different successful films and TV shows. B.J. is probably most recognized by his role on the hit NBC TV series The Office which he also helped write and co-produce. Aside from his work in TV, B.J. has played roles in popular films such as Quentin Tarantino’s Inglorious bastards, The Internship, Saving Mr. Banks and as the villain Alistair Smythe in Columbia Pictures’ The Amazing Spider-Man 2. B.J. recently released his second book, The Book With No Pictures.

This celebrity Speaker graduated high school with his future The Office co-star John Krasinski and graduated from Harvard University with a degree in English and Spanish Literature. While attending Harvard he also contributed to the Harvard Lampoon, the second longest running humor magazine in the world. After college he tried his hand at stand-up comedy and was named to Variety magazine’s list of 10 Comedians to Watch in 2003. His first major acting gig would come that same year as a lead prankster on Ashton Kutcher’s popular MTV show Punk’d. During his tenure working on The Office, B.J. was twice awarded the Screen Actors Guild Award for Outstanding Performance by an Ensemble in a Comedy Series and the 2006 Writer’s Guild of America Award for a Comedy Series. He is also responsible for directing 8 episodes of the show from 2009-2012, and acts as a consulting producer for former co-star Mindy Kaling’s new comedy series The Mindy Project.

B.J.’s father William Novak is a renowned ghostwriter that has written memoirs for the likes of Nancy Reagan, Magic Johnson and Lee Iacocca. Following in his father’s footsteps, B.J. signed a 2-book deal with Knopf Doubleday Publishing Group at Random House beginning with One More Thing: Stories and Other Stories, a host of fictional stories that highlight the essence of human emotions.