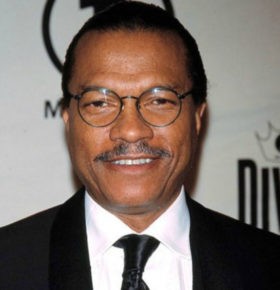 Billy Dee Williams is an actor who is famous for his leading roles in many films, including Mahogany, Lady Sings the Blues, Stars Wars Episodes V and VI, and the Lego Movie. Williams is expected to return this year as Lando Calrissian in Star Wars Rebels.

Celebrity Speaker Billy Dee Williams made his film debut in 1959’s Academy-Award nominated film The Last Angry Man, acting the role of a delinquent young man.  In 1971, Williams gained major recognition for portraying Gale Sayers in the highly lauded television movie Brian’s Song, and he was nominated at the Emmy Awards for best actor. The following year, he starred as Louis McKay in the movie Lady Sings the Blues, which received five Academy Award nominations. In the 1980s, Williams portrayed Lando Calrissian in the blockbuster films Star Wars Episode V: The Empire Strikes Back and Star Wars Episode VI: Return of the Jedi. Between acting in these two films, Williams starred as a cop alongside Sylvester Stallone in the critically acclaimed thriller Nighthawks. In addition to his movie roles, Williams has also appeared frequently on television series, including Scrubs, Modern Family, That 70s Show, and NCIS. Known for his deep and smooth voice, Williams additionally voiced the character Redmond Boyle in the video game Command & Conquer 3: Tiberium Wars. Over the span of his career, Williams has appeared in five Broadway plays, over 40 films, and over 60 television series.

Outside of acting and being a celebrity speaker, Williams is an accomplished artist whose work can be seen hanging in the National Portrait Gallery, the Smithsonian Institution, and the Schomburg Museum. He is also a talented singer featured in the 1961 jazz LP entitled Let’s Misbehave, which was a commercial success. In addition to being an acclaimed artist and singer, Williams has authored three fiction books: Twilight, PSI/Net, and Just/In Time. Williams recently appeared in the 18th season of Dancing with the Stars with professional dancer Emma Slater.