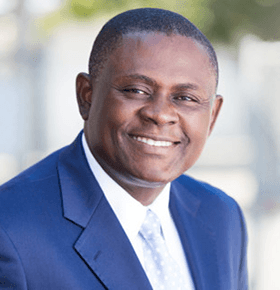 Motivational keynote speaker for hire Bennet Omalu is a celebrated physician, neuropathologist and forensic pathologist who was the first to discover and document the effects of chronic traumatic encephalopathy (CTE) most commonly found in football players and action sports stars. Bennet is a pioneer in the world of sports medicine who faced scrutiny from his medical peers and countless others who tried to discredit his findings. Bennet’s story of finding and proving his theory to the world was immortalized in the 2015 film Concussion starring Will Smith.

The film introduced the general public to Bennet’s inspirational story of perseverance and determination, and he has since become an overwhelmingly popular motivational speaker for corporate conferences, leadership summits, university speaker series and other industry events. When he is not traveling as a motivational speaker, Bennet serves as the chief medical examiner for San Joaquin County in California and teaches classes in the department of medical pathology and laboratory medicine at UC Davis.

Bennet grew up in war-torn Nigeria and attended medical school at the University of Nigeria, Nsukka. He spent several years completing clinical internships and service work before moving to Seattle, Washington in 1994 to complete an epidemiology fellowship at the University of Washington. A year later he moved to NYC for a residency training program with Colombia University’s Harlem Hospital Center. He eventually wound up working under famous forensic analyst Cyril Wrecht at the Allegheny County Coroner’s Office in Pittsburgh, Pennsylvania. It was there that Bennet became enthralled with neuropathology.

In 2002, Bennet noticed the first signs of a neurological condition linked to chronic head trauma while performing an autopsy on former Pittsburgh Steelers wide-receiver Mike Webster. While Webster’s brain appeared normal during regular autopsy, Bennet’s curiosity and further research was crucial in linking the dots between head trauma and tau protein build-up in the brain. In 2005, Bennet and his colleagues published their findings on CTE and he shared his findings with Roger Goodell at a league-wide concussion summit held in 2007. Yet Goodell and the NFL refused to acknowledge the link between concussions and CTE until 2 years later.

Goodell and the NFL were among many others including certain medical professionals who were skeptical and downright rejected Bennet’s findings early on. Bennet’s determination to prove his findings ultimately led to one of the biggest breakthroughs in modern sports medicine and his research now extends past the football field to military veterans and professional wrestlers. He has since founded a non-profit raising awareness and financial support for CTE research as well as the Brain Injury Research Institute in West Virginia.

Would your organization like to hire Bennet Omalu to speak or make a personal appearance at your next event? Contact Celebrity Speakers Bureau today to hire Bennet Omalu or another top keynote speaker to entertain and engage your audience at an upcoming corporate conference, speaker series, trade show or special event.