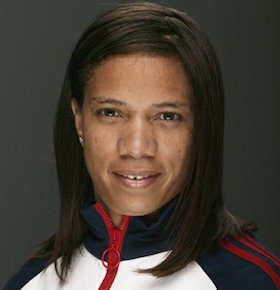 Motivational Speaker April Holmes is an American Paralympic track and field star who competed in the 2004, 2008 and 2012 Paralympic Games for the United States. After losing her left leg below the knee in a tragic train accident in 2001, April learned about the Paralympics and set new life goals to not only represent her country in the Games but also to set world records and bring home that coveted Gold Medal. Now she’s accomplished more than most people have with two legs!

April is a Jordan Brand athlete who represented the U.S. at the 2004 Paralympic Games in Athens, Greece where she brought home her first Olympic medal, a Bronze Medal in the long jump event. She again suited up in the 2008 Paralympic Games in Beijing, taking home her first Olympic Gold Medal in the 100M. Over her career, April has broken 14 International Paralympic Committee records and 18 U.S. records in the 100m, 200m, 400m, and long jump. She’s accomplished several undefeated seasons, thoroughly dominating the rest of the field. As a result, the IPC named April one of the Top 10 Women in Paralympic Sports today.

Off the track, April uses her inspiring story to empower audiences as a motivational speaker and bestselling author. Her speaking topics include motivation, diversity, leadership, goal setting, and empowerment. In 2015, April was hired a featured keynote speaker at the Doha Goals Forum where she touched on the power of diversity in sports. In 2014, April co-authored her first book with Brian Tracy titled The Winning Way. She has appeared on a number of major TV programs and networks including ESPN, NBC’s Today Show and CBS Early Morning.

Also holding an MBA in Marketing, Motivational Speaker April Holmes uses her experience and expertise to improve awareness of others with disabilities. She’s the founder of the April Holmes Foundation, whose mission is to encourage and assist those with physical and learning disabilities to achieve their goals and knock down any obstacles they may face. In addition to her foundation, Motivational Speaker April Holmes has also worked closely with First Lady Michelle Obama on her Let’s Move! campaign.

Motivational Speaker April Holmes is available for a variety of personal appearances including keynote speaking engagements, meet-and-greets and more.