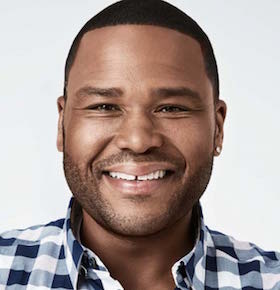 Comedic actor and celebrity speaker Anthony Anderson has appeared in countless television series and feature films throughout his career which spans over almost two decades. One of his first recurring roles was playing Teddy Broadis on the popular NBC teen series Hang Time in the mid-nineties. Since then, Anderson has appeared in several more recurring roles on hit TV shows including Ally McBeal, My Wife and Kids, All About the Andersons, The Bernie Mac Show, Til Death, The Shield, Guys with Kids, and Law & Order. Anthony has made one-time appearances as a guest actor as well on HBO’s Entourage, Raising Hope, and Veronica Mars. He has also been interviewed on countless talk shows, including Lopez Tonight, The Bonnie Hunt Show, Jimmy Kimmel Live!, and The Wendy Williams Show. He can now be seen as the star of ABC’s Black-ish.

As a food enthusiast, Anthony Anderson has also participated on culinary shows including The Next Food Network Star, Cake Boss, Hell’s Kitchen, and even competed on the popular series Chopped in 2013. Over the past few years, Anthony has also appeared numerous times as a judge on Iron Chef America: The Series.

In addition to his long television career, Anthony Anderson is perhaps better known for his acting on the big screen. He has starred in over twenty films to date and has had supporting roles in some of the most profitable movies in the country, including Martin Scorsese’s The Departed, where he joined a large cast of famous actors including Leonardo DiCaprio, Matt Damon, Jack Nicholson, Mark Wahlberg, and Martin Sheen. Anderson also starred in the 2007 blockbuster hit, Transformers, alongside Shia LaBeouf, Megan Fox, Josh Duhamel, and Tyrese Gibson. Other hit films include Big Momma’s House, Scary Movie 3, and The Back-up Plan in which he appeared alongside actress and music sensation Jennifer Lopez.