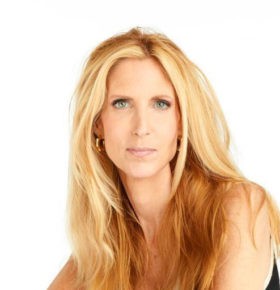 Political Speaker Ann Coulter is a reputable political commentator, journalist and author who makes regular appearances on TV and radio news programs. Ann is also a popular Keynote Speaker for conservative events, university speaker series and women’s leadership conferences. She is the author of an impressive 10 New York Times bestselling books expressing her political views and strategies to rebuild America. Her most recent book, Never Trust a Liberal Over 3 – Especially a Republican, released in 2013 and was an unapologetic insight into liberal politicians.

Her no-nonsense, no holds barred approach to journalism may have made her a polarizing figure to many, but the courage to speak her mind unequivocally is admirable. Ann attended Cornell University where she helped found the student run publication, The Cornell Review. She went on to receive her J.D. from the University of Michigan before beginning starting career as a lawyer. She eventually began working for the United States Senate Judiciary Committee.

Political Speaker Ann Coulter became a popular conservative voice during the 1990’s when she was openly critical of the Clinton administration. She was part of the legal team that helped develop a case against the former president on behalf of sexual harassment victim Paula Jones. It was during this time she also began writing her own syndicated column for Universal Press Syndicate. Her foray into TV journalism began in 1996 when she was hired by MSNBC as a legal correspondent. She now makes regular appearances on a handful of news programs for CNN, Fox News and CBS. In 2005, Political Speaker Ann Coulter was a judge on the Discovery Channel series The Greatest American hosted by Matt Lauer. During the most recent election in 2012, Ann was a supporter of Republican candidate Mitt Romney.