Former Tennis Star and Sports Speaker Andre Agassi has been retired from the game for over a decade, but his success and career accomplishments will forever immortalize him as one of the greatest tennis players of all time.

As an eight time Grand Slam singles champion, he competed in fifteen Grand Slam finals and is an Olympic Gold Medalist. He is the first man in tennis history to win a career Grand Slam and an Olympic gold medal, is one of only three men to reach four consecutive major finals along with Roger Federer and Rod Laver. His awards don’t stop there. Sports Speaker Andre Agassi was the only player in the Open era who won at least one ATP World Tour title over eighteen consecutive years. He was the oldest player to be ranked No. 1 in world, at 33 years 13 days old and was ranked as one of the top ten players in the world in three separate decades: 1980’s, 1990’s and 2000’s.

On September 3, 2006 Andre decided to retire after combatting chronic back problems. Agassi’s autobiography, Open, was published in 2009 and reached number one on the NY Times Bestseller list. Agassi has since written books Extraordinary Lives and The Whirl, outlining his childhood and the key to living a happy life. He is the founder of the Andre Agassi Charitable Foundation and his foundation opened the Andre Agassi College Preparatory Academy in Las Vegas. Andre isn’t the only tennis star in the family, his wife Steffi Graf, is also a former World No. 1 German player. On July 9, 2011 Andre was inducted into the International Tennis Hall of Fame. He is available for speaking engagements, personal appearances and sports clinics. Andre is partnered with Adidas, Longinees, Exclusive Resorts, Head, 24-Hour Fitness, Michael Mina and VIAGOGO.

APPEARANCES: Center Stage, Cold Pizza, Friday Night with Jonathan Ross, Great Performances, Late Show with David Letterman, Live with Regis and Kelly, Mad About You, Mike and Mike in the morning, Real Sports with Bryant Gumbel, SportsCentury, The Arsenio Hall Show, The Casino, The Ellen DeGeneres Show, The Simpsons, The View, They Think it’s All Over, Oprah, ESPN

TO WORK WITH ANDRE AGASSI: Sports Speaker Andre Agassi can be hired for endorsements and events in roles such as corporate appearances, endorsements, speaking and autograph signings. 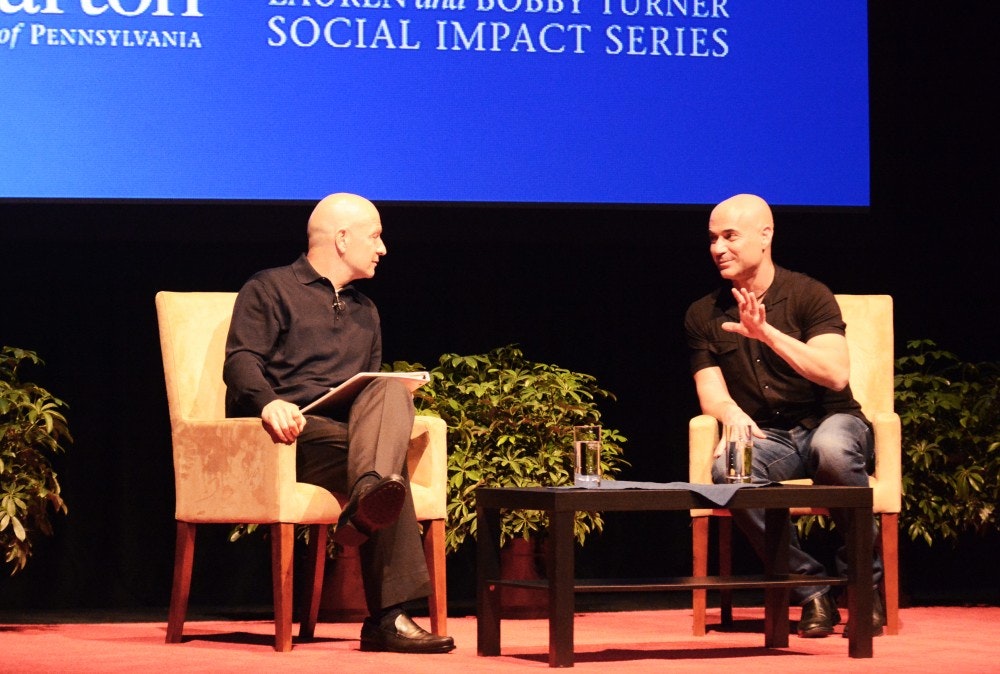