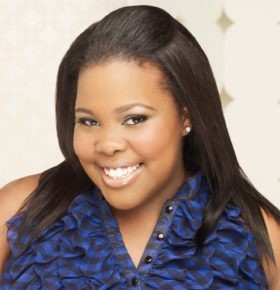 Television star Amber Riley is a woman of many talents, much like Mercedes Jones, the character she played in her most famous part on the hit Fox TV series, Glee. The singer, actress, and dancer appeared on the musical television show from the very first episode in 2009 when she joined a cast of twelve fellow singer/actors in the plot which centered on a reconstructed high school glee club. Riley starred in Glee for ninety episodes alongside television stars including Jane Lynch, Matthew Morrison, Lea Michele, and several other actors whose stardom was elevated by the series. Season four marked the end of Amber’s role on Glee when her character, Mercedes Jones, graduated from William McKinley High School on the season finale in 2013. Throughout the four years that Amber played the part, she exposed her great vocal talent giving several solo performances of songs like Respect, Bust Your Windows, Bridge over Troubled Water, and a very memorable rendition of Whitney Houston’s famous song, I Will Always Love You, as a tribute to musical legend shortly after her death in 2012. Riley also starred in the documentary Glee: The 3D Concert Movie and has made appearances on Late Night with Jimmy Fallon, The Tyra Banks Show, The Oprah Winfrey Show, and countless others.

Following Glee, television star speaker Amber Riley was one of the cast members who competed on season seventeen of ABC’s hit dance competition series, Dancing with the Stars. Riley and her partner Derek Hough won.