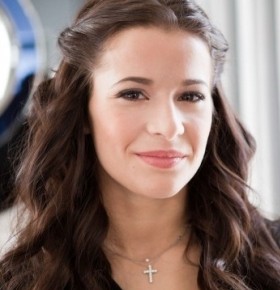 Olympic Speaker Sacramone became one of the first female athletes to be signed as a CoverGirl spokesmodel. She has also served as a spokeswoman for the fitness company Team 24 Fitness and as a designer for Tank Farm, a men’s fashion company. Sacramone has been booked for commercials with Secret deodorant, AT&T, and Gatorade. Her Gatorade commercial notably spoofed Monty Python and the Holy Grail as “Alicia, The Girl Who Made Horse Trotting Noises.”  Sacramone appeared in ESPN’s 2011 Body Issue, where she posed and talked about body image issues in gymnastics.