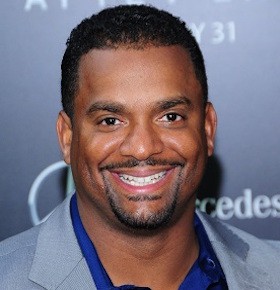 Celebrity speaker Alfonso Ribeiro is a multi-talented entertainer with a high-spirited personality. He is an actor, director, dancer and game show host, but is widely known for his goofy dance moves on The Fresh Prince of Bel-Air. Most recently, the man who made “The Carlton” famous, announced he would be a celebrity contestant in the ABC hit series dance competition, Dancing With The Stars. He will be among YouTube sensation Bethany Mota, legendary comedian Tommy Chong, Duck Dynasty star Sadie Robertson and two-time Teen Choice winner and Pretty Little Liars” star Janel Parrish.

Alfonso first gained recognition for his leading role in the Broadway musical, The Tap Dance Kid, and was nominated for an Outer Critics Circle Award. In 1984, he appeared as a dancer in one of Michael Jackson’s Pepsi commercials and that same year he was cast on the TV-series Silver Spoons as Rick Schroder’s best friend. He also appeared in a commercial on MTV for his dance instruction book, Alfonso’s Breakin’ and Poppin’ Book as well as released a rap record called Timebomb. He is best known for acting the role of Will Smith’s cousin Carlton Banks on the popular NBC sitcom The Fresh Prince of Bel-Air. His character was known for frequently dancing to Tom Jones’ “It’s Not Unusual”, a goofy dance move that became popularly known as “The Carlton”.

In 2008, Alfonso became the host of GSN’s Catch 21. He also directed a few episodes of Meet the Browns and a majority of the second season of Are We There Yet? In 2013, he began hosting his second game show called Spell-Mageddon, on ABC Family. A few months later, he participated in the thirteenth series of the British celebrity reality show I’m a Celebrity…Get Me Out Of Here. Alfonso’s most recent role arrived in 2015 as he became the host for America’s Funniest Home Videos replacing Tom Bergeron.

In his spare time, Alfonso loves to spend time with his family and participate in charity work. Being a father inspired Alfonso to make a shift in priorities and make the world a better place for his children to grow up in. He mainly focuses on lending a hand to charities that benefits children, because it is a good example to his own kids. He also participates in celebrity golfing and racing events.