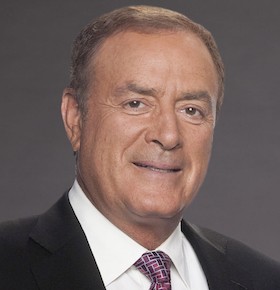 Al Michaels is a prominent figure in the sports broadcasting world with over 30 years of work in the industry covering some of sports greatest moments. Sports Speaker Al is probably best remembered for his work on Monday Night Football with John Madden and for his legendary call of the 1980 Miracle on Ice Olympic hockey game between USA and the Soviet Union.

Al found his start in the sportscasting world in 1964, doing public relations for the Los Angeles Lakers and later four seasons worth of color commentating for the team. In 1968, Al shifted gears, calling games in the Pacific Coast League for the Hawaii Islanders. His time in Hawaii earned Al a cameo as an attorney on Hawaii Five-O in 1970. In 1971, Al moved to Cincinnati, Ohio, working as the lead announcer for the Major League Baseball team, the Cincinnati Reds, who made it to the World Series in Al’s second season announcing. Al covered the Fall Classic for NBC Sports and the hockey games of the 1972 Winter Olympics in Japan. ABC took Al on in 1977 as a back-up announcer for Monday Night Baseball. By 1982, Al had proven his expertise and replaced Keith Jackson as the lead announcer. Al developed a strong relationship with ABC, working for the company for three decades, covering MLB, college football, track and field, golf, figure skating, and a whole slew of other sports.

Al has led a spectacular sportscasting career, as the only sportscaster to do play-by-play or host the Olympics and four other major American professional sporting events, the Super Bowl, World Series, NBA Finals, and the Stanley Cup Finals. Outside of the sportscasting world, Al has made a name for himself with guest appearances in major motion pictures Jerry Maguire, BASEketball, Coach, Spin City, and Miracle. Al’s also been featured as an announcer in several video games. He is also an author who wrote a memoir on his sports broadcasting career titled You Can’t Make This Up that debuted to the public in November 2014.