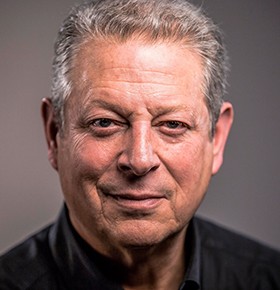 Celebrity keynote speaker for hire Al Gore is perhaps best recognized as the former Vice President of the United States who served during the Clinton administration from 1993-2001. He was also chosen as the democratic nominee for president during the controversial 2000 Presidential Election in which George W. Bush was elected president following a vote recount in Florida. Since leaving office, Al has worked tirelessly as an environmental activist and thought leader on the effects of climate change. He was the subject of the 2006 Academy Award winning documentary An Inconvenient Truth: The Planetary Emergency of Global Warming and What We Can Do About It. Today, Al is regularly hired as a featured keynote speaker for environmental conferences and leadership summits as well as university speaker series and fundraisers.

Al is the son of former U.S. Senator Al Gore, Sr. and his mother Pauline was one of the first women ever to graduate from Vanderbilt University Law School. Al majored in government at Harvard University and it was there that he first became fascinated with the concept of global warming and other environmental issues. Upon graduating, he enlisted in the Army in 1969 and served in Vietnam until 1971. Upon his return to the states, Al worked as an investigative reporter for The Tennessean and briefly attended law school at Vanderbilt before deciding to run for a seat in the U.S. House of Representatives in 1976.

Al served in the U.S. Congress for 16 years from 1976-1993 as a representative from Tennessee. He took over his father’s seat in the House of Representatives at the age of 28 and moved to a seat in the Senate in 1985. He was considered a moderate on political and social issues while in Congress but was a crusader for environmental issues, becoming the first congressman to host hearings on climate change, toxic waste and global warming. He also sat on several committees including the Energy of Commence and Science & Technology committees.

During his time in Congress and serving as Vice President to Bill Clinton, Al was a known Atari Democrat in which he supported and advocated for the development of technology and related businesses to stimulate the economy and create jobs. Al coined the phrase “Information Superhighway” to describe the internet and was a catalyst behind the dot com boom from 1995-2001.

Would your organization like to hire Al Gore to make a personal appearance at your next event? Contact Celebrity Speakers Bureau today to hire Al Gore or another top social media speaker to entertain and engage your audience at an upcoming corporate conference, speaker series, trade show or special event.