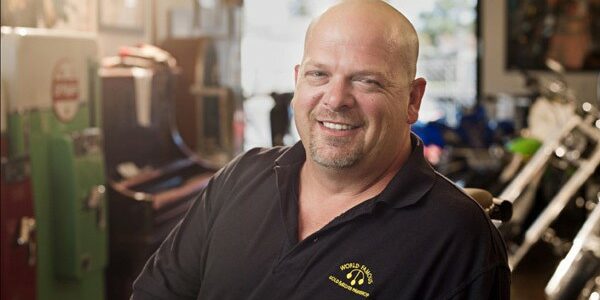 Pawn broker might not be the first job that comes to mind when you think of a multi-millionaire entrepreneur, but that’s just one aspect of Rick Harrison’s surprising bio.

The edgy personality of the History Channel’s hit series Pawn Stars has a keen eye and a killer business sense. But his background is more of the hard knocks variety than ivy league pedigree. It’s this rollicking, nontraditional life that’s catapulted him to fame.

Harrison was born in North Carolina, but his father’s business ventures brought the family out west. After landing in several cities, they settled in Las Vegas, and that turned out to be a lucky draw. As a newly married high school dropout, Harrison toted fake Gucci bags for $2,000 throughout Sin City, a gimmick that earned him enough money to start a pawn shop with his father. Here’s where things get pretty interesting in Rick Harrison’s surprising bio.

Business grew rapidly! Las Vegas is a place where anything goes, and often anyone and everyone goes to the pawn shop to get some gambling money. Herein lies the genius of such a business in the area. Even better, you never know what you’re going to get in a place like Las Vegas. There are some wild people and bizarre wares for sale, but mixed in are unbelievable collector’s items. The Gold & Silver Pawn Shop’s seen everything from a self-made knight costume worn during a dinner theater performance to Paul Revere’s authentic dining spoon. You just never know who’s going to walk in the door and what on earth they’re going to offer. Here’s where Rick Harrison’s surprising bio works: diligence and experience in the pawn business trumps any course in business school. You need an eye and a natural quality as a savant!

Check out the 8 biggest payouts in Pawn Stars history!

Crazy characters mean more opportunity. Harrison self-produced his own reality show featuring the Gold & Silver Pawn Shop and uploaded it to YouTube. This is where Rick Harrison’s surprising bio takes a powerful turn. The show was picked up by the History Channel, and when it aired, Pawn Stars brought in the network’s highest ratings to date. Today, both the show and the shop remain massive money-makers.

If there’s one thing we can take away from Pawn Stars, it’s that success can be found in the most unlikely places. The portion of a rare twenty dollar bill might make Harrison’s biggest payday (or, maybe not). Call it instinct, but that wouldn’t be enough. An expertise, a head for branding, a motivation—these are all critical ingredients in business, but maybe the most imperative part of the entrepreneurial recipe is believing in the idea. Faith, basically.

You don’t need an MBA to know what makes people tick. You need passion in an idea and common sense. A person with Rick Harrison’s surprising bio is bound to be a well-read, widely-fascinated business person who’s not afraid to take a risk. They also need to be up for some wild personalities!

Rick Harrison discusses how his business came out about and grew into a country-wide phenomenon.

Harrison knows that in Las Vegas people want money. The entire city is built on spending it and making it, then flaunting it high roller style. Pawning is a gamble in its own right, so the Harrison family fits right into the spirit of Las Vegas. In many ways, building a start-up company is a pretty big gamble in its own right. You need to hone your odds, count your money, and make good deals.

They say you make your own luck and, for so many entrepreneurs, that’s exactly the case. Leaders in the entrepreneurial world come from all walks of life. Some have led wild and crazy lives while others walk a more traditionally sculpted path. Rick Harrison’s surprising bio is a story in and of itself! Either way, there’s a lot we can learn from these powerhouse entrepreneurs.