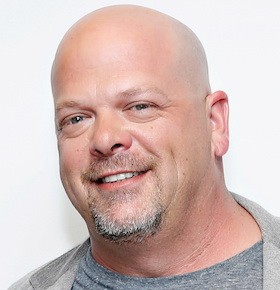 Reality TV speaker Rick Harrison is a co-owner of the World Famous Gold & Silver Pawn Shop in Las Vegas, which is featured on the popular History Channel series Pawn Stars. In addition to starring in over 260 episodes of Pawn Stars, Harrison has also made an appearance in Microsoft commercials that question the credibility of the Google Chromebook. Harrison can also be seen on United Stuff of America, which has a focus on notable artifacts that were used in important moments in history, and the game show Pawnography, where Harrison, Corey and Chumlee compete against players to prevent them from winning cash, both on the History Channel.

After the Gold & Silver Pawn Shop’s tremendous success and appearance in the show Insomniac with Dave Attell in 2003, the reality TV star Harrison spent four years pitching a reality TV show based on his pawn shop. While his efforts were futile, Leftfield Pictures’ Brent Montgomery and Colby Gaines developed the idea of starting a TV series based on a Las Vegas pawn shop and chose Harrison’s pawn shop for the show.  His store had become well-known for its rare sports items, such as a New England Patriots Super Bowl ring belonging to cornerback Brock Williams. Since Pawn Stars’ inception in 2009 on the History Channel, it has become the channel’s highest rated program and was the second-highest rated reality show in 2011.

In 2001, the reality TV star Rick Harrison published his bestselling autobiography entitled License to Pawn: Deals, Steals, and My Life at the Gold & Silver. The book was an instant hit, landing in the top fifty on the The New York Times Best Seller List. He has also appeared on many talk shows such as The Tonight Show with Jay Leno and collectible shows such as American Pickers. Harrison received the Pawnbroker of the Year Award in 2010 from the National Pawnbrokers Association for his efforts in educating the public regarding the pawn industry. Harrison finds satisfaction in working with the Epilepsy Foundation, as he suffered from epileptic seizures as a child. He also contributes to various charitable causes, including the St. Baldrick’s Foundation, the Susan G. Komen Foundation, and the American Heart Association.