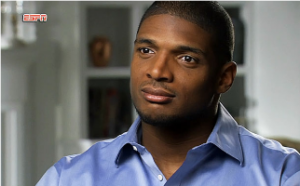 Just like the bright lights, flashing cameras, and media storm which preceded the televised announcement Lebron James held to reveal his choice to leave Cleveland for Miami, the same can be expected for football star Michael Sam in the next few months leading up to the NFL draft following his big announcement on Sunday. The former Missouri defensive lineman and now NFL draft prospect publicized that he was gay in a private interview held with ESPN’s Chris Connelly. Michael is projected to go in the third or fourth round of the NFL draft in May and, if he is signed, will become the first openly gay man in the history of the National Football League. Since the interview aired, the story has seen an avalanche of media attention from sporting news outlets and major news outlets such as CNN and Fox News.

The issue of homosexuality in sports is just part of a bigger social issue that is developing in the United States. Several states have already legalized same-sex marriage while others remain firmly against it. Just weeks ago on The Grammy’s, Queen Latifah married a group of same-sex couples while Macklemore played his hit song Same Love, advocating for marriage equality. Enter Michael Sam, yet another member of America’s vast entertainment universe that is now going to become a pioneer and mentor for others like himself. Last year, Baylor’s star center Brittney Griner was drafted #1 overall in the WNBA draft and also revealed to the public that she was gay. The public also learned that her former university had advised her to keep quiet on the subject to save face, which introduced the reality that gay athletes can be victims. Michael came out to his Missouri teammates before the 2013 football season and reports that his teammates were fully accepting of him and continue to stand behind him 100%. What remains to be seen is how this will affect his draft position, if at all. The NFL has spoken out in support of Sam in the early days following the announcement but it could inevitably stick in the back of the minds of some coaches and NFL scouts who may view him differently now.

Social connotations that accompany the idea of homosexuality could be a major reason why it is more of an issue for sports teams and fans than in other parts of the entertainment industry. Popular music artists such as Ricky Martin and Frank Ocean broke boundaries when they shared to the world their homosexuality, and popular daytime show host Ellen DeGeneres remains one of the most popular TV hosts of all time, despite coming out early in her career. Yet the definition of a strong, masculine professional athlete doesn’t necessarily fit with how the public would define a gay man. It seems that the more gay athletes like Michael are able to find the courage to come out will dictate the amount of change that the professional sports rankings can expect to see on the bubbling hot social issue.