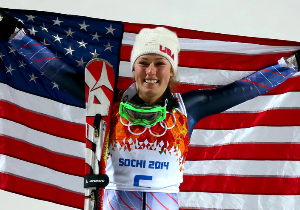 American alpine skier Mikaela Shiffrin is at the peak of the highest mountain she’s ever reached in her career after a near flawless performance in the slalom event at the 2014 Winter Olympics in Sochi, Russia. At just 18 years old, Mikaela is the youngest Gold Medal winner in the history of the Olympic slalom event and completed the trifecta as the current reigning World Cup, World Championship, and Olympic champion in slalom. Not much can top an Olympic Gold Medal at 18, however being sponsored by a candy company has got to be every kid’s dream.

Before heading to the 2014 Winter Games, Mikaela inked an endorsement deal with SNAP Infusion Supercandy, a sports nutrition brand specializing in high performance snacks that refuel electrolytes, boosts energy with lots of Vitamin B, and are full of antioxidants to help strengthen your immune system. SNAP Infusion is one of many brands and organizations that align themselves with athletes heading into the Olympics in hopes for a star performance that will in turn bring attention to their brand. Proctor & Gamble’s sponsorship of this year’s snowboard slopestyle Gold Medalist Jamie Anderson and Kellogg’s partnership with gold medal winning figure skaters Meryl Davis and Charlie White proved to be good business moves for both companies going forward from the Olympic Games. Many may not be familiar with the company Putnam Investments, but they will recognize the Sochi Gold Medal winning skier Ted Ligety who is featured in their latest ad campaigns. For any company or brand it’s all about trying to speculate which athlete will shine on the world’s biggest stage and bring in the major recognition to open up new marketing opportunities post Olympics.

Mikaela was recently asked if she has peaked too early in her career to which she responded with a big smile and an emphatic, “I’m just getting started, guys.” The same could be said for the influx of media requests, sponsorship and endorsement opportunities that will now ensue for the record-setting Olympian. Shiffrin will likely be on her way back to the States in the coming days, like her fellow Team USA victors Sage Kotsenburg and Kaitlyn Farrington who have already begun their whirlwind of press and media engagements in New York City, visiting the set of big network broadcast such as the Late Show with David Letterman and Good Morning America. Bon voyage Mikaela!