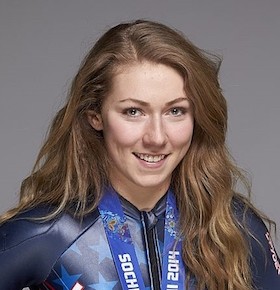 Mikaela Shiffrin is an American alpine ski racer who is the 2014 defending World Cup champion and FIS Alpine World Ski Champion in the slalom event. At just 18 years old, Mikaela was named to the 2014 United States ski team picked to represent the nation at the Winter Olympic Games in Sochi, Russia. This Olympic Speaker, heralded as “The Next Lindsey Vonn,” Mikaela was featured on 1 of 4 commemorative covers of the Olympic preview edition of Sports illustrated magazine.

Olympic Speaker Mikaela has high hopes for her career in competitive skiing and her accolades up to this point are quite impressive. She got her first sponsorship at age 12 after enrolling at Burke Mountain Academy in Vermont, a private school for the nation’s top skiers that has graduated 130 U.S. Ski team members and seen 45 of them go on to participate in the Olympics. In March of 2011 she would compete in her first World Cup event and a month later captured the U.S. National Championships title in the slalom event before even turning 16. This win currently ranks Mikaela as the youngest American skier ever to win an alpine event at the National Championships. She won her first World Cup race in December of 2012 and proceeded to win two more world Cup races in the next month to solidify herself as one of the top alpine skiers in the world bar none. She competed in her first World Championship events throughout the year of 2013 and won the overall World title in slalom.

Her skiing ability has allowed her to link up with a few companies in her industry for endorsement deals including Atomic Skis, Oakley, and Leki. She is also a part of Proctor & Gamble’s “Thank you Mom” campaign for the 2014 Winter Olympics. In February of 2014 before the Winter Games in Sochi, NBC aired a special documentary called How to Raise an Olympian which featured the stories of Mikaela and 6 other Olympians and their journey to become an Olympian.