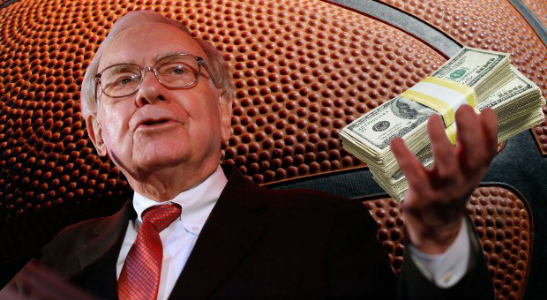 Remember the hefty $1.5 million Esurance gave away to one lucky Tweeter on Jimmy Kimmel Live following their post-Super Bowl TV commercial giveaway? Well it looks like the avid college basketball fan and business titan Warren Buffett is now raising the sweep-stakes after a recent announcement that he will give away $1 billion to the person that fills in a perfect NCAA Tournament bracket this March Madness. Buffett, who might have a little more interest in the tourney this year since his beloved Creighton Blue Jays garnered their high seed in the bracket, has partnered with Quicken Loans to create the Quicken Loans Billion Dollar Bracket Challenge where all it takes is a few simple clicks and the stars to perfectly align and you can win the big bucks.

For the record, a perfect bracket has never been officially filled out in the history of bracket-ology since ESPN first began holding their bracket challenge in 1998 but don’t let that discourage you. The opportunity only exists for the first 15 million people to enter and the top 20 entries will still receive a cool $100,000, so why not? The tale behind the tape is that Buffett and Quicken Loans are joining many companies like AT&T and Northwestern Mutual that look to make a marketing slam dunk each year during the electric atmosphere of postseason college basketball on the biggest of stages, literally. The tournament venues will hold anywhere from about 20,000-68,000 people with the championship game begin held in Jerry Jones’ new football mecca, AT&T Stadium that seats 80,000. If you couple that with the millions of TV viewers we’re talking about a limitless marketing opportunity for a company’s ad campaign.

On the opposite side of the spectrum are the athletes. Now obviously given the amount of NCAA rule violation scandals currently hampering college sports we all know the athletes can’t get paid for providing historic performances, but let’s call it a future investment. Take Indiana Hoosier legend and former coach of the Sacramento Kings Keith Smart and Duke’s Christian Laettner for example. Both have hit iconic game-winning shots to win the big dance for their teams and every year around this time they are called upon to make personal appearances and relive the moments that made them who they are today. The classic rivalry between hall of famers Magic Johnson and Larry Bird began in the 1979 NCAA Championship final, and even 30+ years later, they are still talking about that year Magic took the championship away from Larry. Even today’s top sports broadcasters like college basketball’s #1 fan Dick Vitale and familiar voice of the NCAA tournament Jim Nantz will be operating on a very appearance-heavy schedule because when they’re not calling the game, they’re on a major news and sports network talking about the game or games to come. Unbeknownst to many fans, Dickie V is one of the most requested motivational sports speakers when he’s not working with the big show now, that’s a true diaper-dandy baby. The play-in games are set to begin March 18 so sit back, relax like a true Buffett would, and wait in angst as your billion dollar bracket will likely bust ultimately, but the joy is in the chase, is it not?