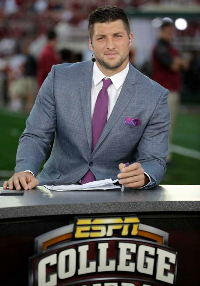 Attention Tim Tebow fans: You may miss watching your sports idol on the field, but he won’t be disappearing from your television set anytime soon. During his promising debut as a college football analyst during pre-game coverage of the 2014 BCS National Championship game, Tebow made a few shockingly accurate predictions.  He was spot-on in calling that Auburn would employ the simple running plays they had successfully been using all year, and his forecast of a 35-31 Florida State victory was only one point away from the actual score, 34-31. Despite the public backlash and a few harsh critics, the former Denver Broncos quarterback clearly demonstrated his ability to speak eloquently and confidently behind a microphone.

With Tebow’s debut as a broadcaster, he has joined the ranks of a plethora of former NFL football players currently behind the microphone. Michael Strahan, who speaks on Fox NFL Sunday, was a defensive lineman for thirteen seasons during the 1980’s and 1990’s with the Washington Redskins, San Diego Chargers, and Phoenix Cardinals.

Howie Long is another football analyst who is a former NFL player. Long played defensive end in the NFL for 13 years and was inducted into the Pro Football Hall of Fame in 2000. He is currently a studio analyst for Fox Network’s NFL coverage.

Though Long and Strahan played different positions than Tebow, Tebow’s identity as a former NFL quarterback aligns him with other football broadcasters, including Terry Bradshaw, Dan Marino, and Jesse Palmer. Bradshaw, who serves as a co-host of Fox NFL Sunday, won four Super Bowl titles during a prolific career with the Pittsburgh Steelers.  Record-holding Dolphins quarterback Dan Marino is currently an analyst for CBS’s Sunday pregame show The NFL Today. Palmer, who appeared as the Bachelor in the fifth season of the reality television series, played for the Giants from 2001 to 2004.

Tebow is slated to appear on the upcoming SEC Network as a co-host of SEC Nation next year. And don’t be surprised if you see also see him speaking on behalf of a company or organization, as he has done with various companies in the past. While he may not be lacing up his cleats and charging through the tunnel, Tebow is here to stay in the sports world. This time, however, it’s in coat and tie.