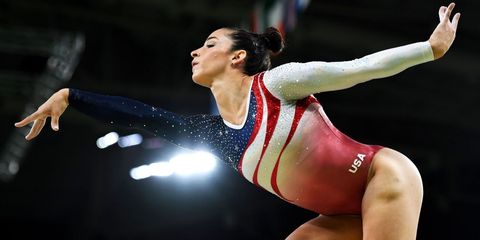 Looking to hire a gymnast speaker for your next event? Celebrity Speakers Bureau has a list of amazing gymnast speakers who you can hire to work with. These gymnasts are all incredible athletes and inspiring women, so let’s take a look at ten of them. 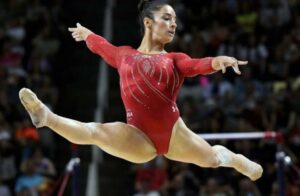 Aly Raisman was the memorable captain of both the “Fierce Five” and “Final Five”. In 2012 she was the most decorated American gymnast at the games with two gold medals and one bronze medal. Then, in 2016, Raisman was the floor silver medalist and the individual all-around silver medalist as well. After winning a gold medal in the team event at the 2016 Olympics, her and Gabby Douglas became the only Americans to win back-to-back team gold medals. 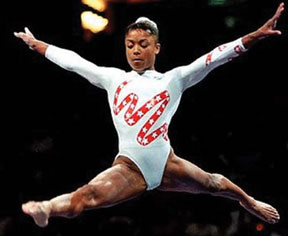 Also known as “Awesome Dawesome”, Dominique Dawes was a member of the U.S. national gymnastics team for ten years. Dawes was a three-time Olympian and was a member of the “Magnificent Seven” who won Gold at the 1996 Summer Olympics. Dominique was the first black person of any nationality to win an Olympic gold medal in gymnastics. She was also the first African-American woman in artistic gymnastics to win an individual Olympic medal. 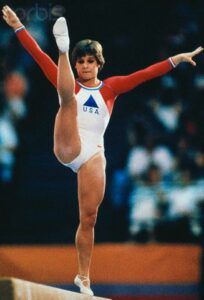 Mary Lou Retton became a crowd favorite after her performance at the 1984 Summer Olympics. After winning a gold medal, she became the first american woman to win the all-around gold medal at the Olympics. When Retton won this medal, she also became the first female gymnast from outside of Eastern Europe to do so, and was named “Sportswoman of the Year” in Sports Illustrated Magazine. 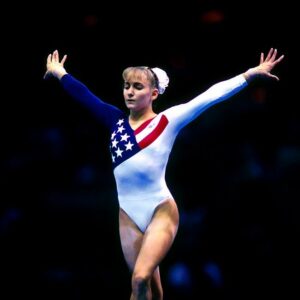 Shannon Miller was a member of the “Magnificent Seven” along with Dominique Dawes. She was the world all-around champion in both 1993 and 1994, and the balance beam champion in 1996. Shannon Miller has seven Olympic medals and was the most successful athlete at the 1992 Summer Olympics where she won five medals. She also earned a total of 16 medals between 1991 and 1996 in World Championships and the Olympics combined. 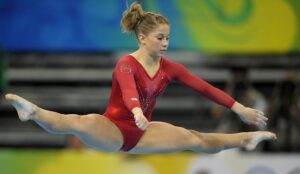 Shawn Johnson East is a  very recognizable U.S. gymnast having won the gold medal for balance beam in the 2008 Olympics. She earned silver medals in team, floor exercise, and all-around that year as well. Shawn has also earned a gold medal five times at the Pan American Games. In 2007, she was the World Champion on floor exercise, the individual all-around champion, and won a gold medal with the U.S. gymnastics team. 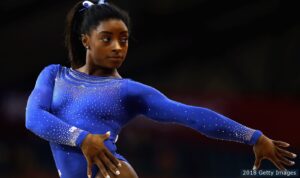 With 30 Olympic and World medals, Simone Biles is the most decorated American gymnast and is third in the world. Biles also holds the record for the most World all-around titles, and is the first American gymnast to win a World medal on every event. Many others consider Biles to be the greatest gymnast ever, as she is also a five-time World all-around champion and five-time World floor exercise champion. 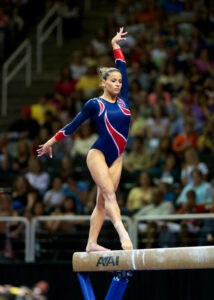 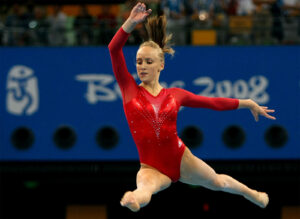 Russian American former gymnast Nastia Liukin is a five-time Olympic medalist. She is tied with Shannon Miller among U.S. gymnasts for the third-highest number of World Championship medals. Liukin also previously had tied Shannon Miller in being the American gymnast with the most medals in a single Olympic Games until Simone Biles came along. Nastia represented the United States in one Olympic Games as well as three World Championships 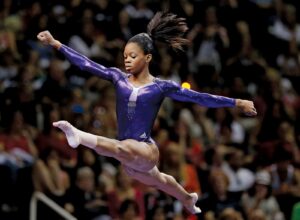 Gabby Douglas was a member of the “Fierce Five” and “Final Five” in the 2012 and 2016 Olympics, in which both teams won gold. Douglas was the all-around champion at the 2012 Olympics, and was the first African American in Olympic history to accomplish this. Douglas was also the first U.S. gymnast to win gold in the team competitions as well as the individual all-around at the same Olympics.

Romanian retired gymnast Nadia Comaneci is a five-time Olympic gold medalist, with all of her medals in individual events. Comaneci was the first gymnast to be given a score of 10.0 in the Olympic games. That same year for the 1976 Summer Olympics, she was able to go on and win three gold medals. She has a total of nine Olympic medals and also has four medals from World Artistic Gymnastics Championships.