Are you looking to hire a celebrity speaker for your next conference or event in 2019 or 2020? Well, Celebrity Speakers Bureau has got you covered. Whether you are looking for one of the hottest new entrepreneurs in the market, or an exemplar of an entertainment icon, we’ve got ’em all listed as a one-stop shop for you to book a celebrity for your next event. 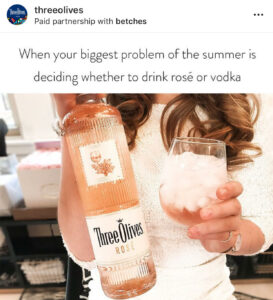 Three Olives vodka is sticking to its flavored vodka roots by knowing their DNA, instead of taking part in the craft cocktail influx. “Craft is not our approach, it’s not who we are,” states Erin Chin, group brand director at Proximo Spirits, Three Olives’ parent company. “We’re about flavor, fun and good-quality vodka that brings people together.” The brand may be sticking to flavor, but it has revamped its advertising technique. In specific, the spirit brand has a newfound focus on digital advertising. By knowing their brand identity, the company used influencer campaigns to boost their awareness by 32%, while generating more than 200 million impressions among paid and organic channels per an announcement shared with Mobile Marketer.

The challenge was to introduce this new flavor to a crowded vodka market in a refreshing and breakthrough way. Three Olives also wanted to extend the life of their vodka by positioning it as a drink that could be enjoyed at night, as well as during the day. And so, the liquor brand’s “Finding Otherness” campaign for the launch of a rosé-flavored vodka, Vrosé, also increased purchase intent by more than 10%.  Until recently, Three Olives focused heavily on traditional TV and print advertising, whereas the focus now is on a digital strategy based on platforms like Instagram and Facebook, and influencer marketing. “It’s a total relaunch of the brand in terms of where we’re choosing to show up,” said Ken Matsubara, creative director at The Via Agency, the brand’s creative agency. “We realize that it’s a cluttered category and where we interact with our consumers really matters.” Thus, Three Olives worked with Arena, part of Havas Media Group, and enlisted influencer platform Linqia to partner with more than two dozen influencers who created more than 100 posts that included the #vroséallday hashtag. The campaign leveraged a diverse cross-section of influencers covering interests from lifestyle, active living, fashion, culture, DIY, and beverages. The posts featured photographs, videos, and blogs, including creative for National Wine Day and National Rosé Day.

The campaign had an average engagement rate of 27% and brand perceptions also improved amongst categories describing Three Olives as “high quality” and “like to be seen drinking,” according to a consumer survey sent to consumers after the campaign. Instead of licensing deals with big names like Lil’ Kim and the estate of Marilyn Monroe, with which it booked for endorsements in 2013 to create a Marilyn Monroe Strawberry Vodka, the focus is now on booking social influencers. For instance, the brand’s “Find Otherness” campaign, features people like body painter Johannes Stötter and fashion designer Ron Bass, who each have a unique point of view on fashion and art among other fields. The brand also hired influencers such as empowered women for hire The Betches, Halsey,
and Busy Philipps, in addition to multiple micro influencers to promote paid partnerships for the brand.

Clearly, their strategy of booking social media influencers is working, as numbers do not lie. The campaign generated so much monetarily, that two-thirds of the brand’s total advertising budget is now devoted to digital marketing.