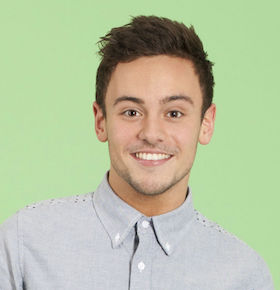 Olympic diver, television personality, and celebrity sports speaker Tom Daley made his Olympic debut at the young age of fourteen in Beijing at the 2008 Olympic Games. Prior to competing in the Olympics, Daley saw much success as a young diver, winning several Gold and Silver medals in the Junior World Championships, European Championships, and World Championships. As the youngest competitor to make it to finals in Beijing, Daley fell short of an Olympic medal but used the experience to prepare for the 2012 Summer Olympic Games in his hometown London, England. Tom’s hard work paid off in the years following as he won two gold medals at the Commonwealth Games in 2010 and in 2012 earned his first Olympic medal in the 10 meter Individual Platform diving competition.

Following the 2012 Summer Olympic Games, Tom Daley’s fame only continued to grow as the bronze medalist was asked by the UK television network ITV to star in their celebrity diving reality series, Splash! Tom signed on as the diving mentor of the show, serving as coach/adviser to the celebrity contestants. The show premiered in January 2013 to high ratings and the series was renewed for a second season.