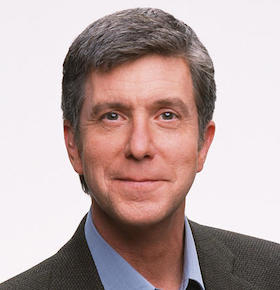 Emmy Award winning television host and Celebrity Speaker Tom Bergeron is one of the most recognizable people on primetime television today. As host of the hit ABC dance competition series, Dancing with the Stars, since 2005, Tom has been nominated six times for the Primetime Emmy Award for Outstanding Host for a Reality or Reality-Competition Program. He won the Primetime Emmy Award in 2012 and a Daytime Emmy Award  . Bergeron worked with several different co-hosts on the show including Lisa Canning, Samantha Harris, and Drew Lachey before current co-host Brooke Burke signed on in 2010.

Prior to hosting Dancing with the Stars, Tom Bergeron worked as host for several radio and television talk shows including his early morning radio show The Tom Bergeron Show, morning TV talk show Breakfast Time on FX cable network and ABC’s Good Morning America. From there he got the role of game show host for the popular show Hollywood Squares. Bergeron hosted Hollywood Squares for six years and won his first Daytime Emmy Award for Outstanding Game Show Host. In 2001 he got the opportunity to host America’s Funniest Home Videos, a role he continues to hold today.

Tom Bergeron’s television career also includes appearances on programs outside his hosting duties. Tom has had acting roles on TV series including The Nanny, According to Jim, Star Treck: Enterprise, Castle, and The Daly Show. He has also appeared as a talk show guest on programs including Chelsea Lately, The Rachael Ray show, Larry King Live, ABC’s The View, The Oprah Winfrey Show, Entertainment Tonight, and even was a contestant on Jeopardy!