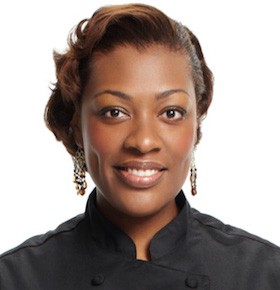 Celebrity Chef Tiffany Derry has made a name for herself with a flurry of TV appearances on cooking competitions, talk shows, and most recently as the co-host of a new Spike TV series called Hungry Investors with celebrity chef John Besh and Bar Rescue’s Jon Taffer. The Celebrity Chef Speaker and Texas native broke into TV on season 7 of Bravo’s Top Chef in Washington, D.C. and was voted that season’s Fan Favorite. Her bright smile and fun-loving approach in the kitchen would earn her an encore appearance on the All-Star edition season 8 of the show where she finished an impressive 4th place ahead of well-known chefs such as Carla Hall and Angelo Sosa.

Celebrity Chef Speaker Tiffany attended the Art Institute of Houston before honing her culinary skills in some of Dallas and Houston’s top kitchens including Grotto Cucina Napolitano and Pesce. She opened her first restaurant in 2011 when she partnered with the Halstin Group President Patrick Halbert to open Private| Social in Dallas. The restaurant was a success, but in 2013 Tiffany would focus all her efforts solely on her new business Tiffany Derry Concepts. Tiffany’s other endeavors have included guest judge spots on Bobby Flay’s Bobby’s Dinner Battle, a culinary expert on Taffer’s Bar Rescue and a guest for a culinary segment on the Kris Jenner Talk Show.

Arguably Tiffany’s biggest TV appearance has now come in the form of co-host of Hungry Investors where the two celebrity chefs and popular bar and nightclub guru find two restaurants who are vying for financial and business help from the co-hosts. In the end, the team picks a winning restaurant and they are given the proper funding and equipment to succeed. She has not forgotten her roots however and is an active presence in her community working with schools and food banks as well as acting as a national spokesperson for the Art Institute’s Culinary Arts Program.