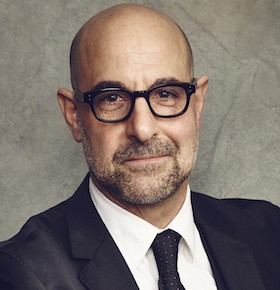 Actor, producer, director, and celebrity speaker Stanley Tucci has been starring in films for almost three decades, making us laugh and cry through his award winning performances. One of his first roles in a blockbuster film was playing a thief named Vernon in the movie Beethoven. The following year, Tucci played the role of an international assassin in The Pelican Brief alongside award winning actors Denzel Washington and Julia Roberts. His portrayal of real life columnist Walter Winchell in the HBO television film, Winchell, earned Stanley Tucci his first Golden Globe Award for Best Performance by an Actor in a Miniseries or Motion Picture Made for TV. He also won a Primetime Emmy Award for Winchell in the Outstanding Lead Actor in a Miniseries or a Movie. He received a second Golden Globe Award for Best Supporting Actor in 2001 for his role as Adolf Eichmann, a German Nazi officer during World War II, in the HBO film Conspiracy.

Stanley Tucci is also known for his roles in more light-hearted films including playing the quick witted Art Director, Nigel, in the 2006 comedy, The Devil Wears Prada. In the film, Tucci stars alongside award winning actresses Meryl Streep, Anne Hathaway, Emily Blunt, and actor Adrien Grenier. Stanley joined forces with Meryl Streep again three years later, playing the role of Paul Child, husband to Streep’s character, Julia Child, in the 2009 comedy-drama Julie & Julia. In 2009, he was nominated for an Academy Award for Best Supporting Actor for his performance in The Lovely Bones. Stanley can also be seen in the hit The Hunger Games series with costars Jennifer Lawrence, Josh Hutcherson, Liam Hemsworth, Woody Harrelson, and Elizabeth Banks. Then  in 2015, Tucci played Mitchell Garabedian in the hit drama Spotlight, which won the Academy Award for Best Original Screenplay in addition to Academy Award for Best Picture. He further has been in several other independent films and miniseries such as Feud, in which actually led Tuccie to be nominated for Primetime Emmy Award for Outstanding Supporting Actor in a Limited Series.

Off screen, Stanley Tucci is a foodie and cookbook author as well. His cookbook, entitled The Tucci Cookbook, features two hundred of his favorite recipes complete with family stories and color photos of the delicious dishes. The Tucci Cookbook was published in 2012 to rave reviews from such culinary heavy hitters as Lidia Bastianich, Anthony Bourdain, and Jonathan Waxman. Most recently as of 2021, Tucci hosted the six-part CNN culinary travel series Stanley Tucci: Searching for Italy.