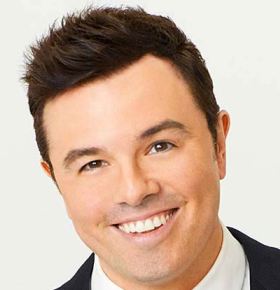 Celebrity Speaker Seth MacFarlane has many titles that could go behind his name with an amazing story on how each came to be. He is an American writer, actor, comedian, singer, political activist, and producer. And the list continues to go on and on. From early on in his life he knew he would be doing something dealing with design but where this thought took him not many could have possibly imagined.

Celebrity Speaker Seth MacFarlane has always loved animation and design. As a young child he began drawing pictures, so much to the point where his parents started buying him books, on the subjects. He eventually decided to attend a design school where he graduated. Everyone knew he had talent and one of his teachers sent in some of his work thus leading directly to Seth receiving a job at a major animation studio right after graduation, Hanna-Barbera. It was here where he honed his skills working on cartoon shows including Johnny Bravo and Dexter’s Laboratory. Seth is most known for writing shows Family Guy, American Dad, and The Cleveland Show. These shows have been on the air for over 10 years. His extremely successful movie, Ted, which features Mark Wahlberg, was number one in the box office for a number of weeks. Ted 2 the sequel just recently came out in June 2015. Another hit movie that Seth co-wrote and starred in is A Million Ways to Die in the West which was released in March 2014. Seth has been invited on Jimmy Kimmel Live, and The Late Show with David Letterman to discuss his upcoming movies and television shows. You can always expect Seth to have a joke or two ready as he did when he hosted the Oscars in 2013. However, contrary to what many may think Seth is not all about jokes and play time. When it’s time to get serious he knows just what to do.

In 2007 Seth supported the Writers Guild of America Strike by not going to work at Fox. He is a political activist and has shown support for past presidents during their campaign. Seth has also voiced his opinion on the controversial LGBT issue stating that he supports equality for everyone no matter race, sex, gender, or sexual preference. He has been nominated for three Grammys and won his two Emmy Awards in the early 2000s.