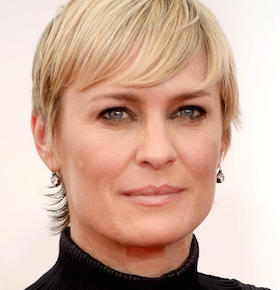 Celebrity speaker Robin Wright has been working in the entertainment industry as an actress, singer, and director for over three decades. Getting her start at age eighteen, Wright’s first acting gig was on the soap opera Santa Barbara for which she received three Daytime Emmy Awards nominations in the Outstanding Ingénue in a Drama Series category.

From there, Robin moved from the small screen to the silver screen, starring in the title role of the romantic comedy fantasy adventure film, The Princess Bride. Since then, Robin Wright has starred in countless other much loved films including Message in a Bottle, Unbreakable, Moneyball, The Girl with the Dragon Tattoo, and the critically acclaimed 1994 film, Forrest Gump. In one of her most famous roles, Wright played Jenny Curran, the love interest of the main character played by Tom Hanks. The film also starred award winning actors Gary Sinise and Sally Field. For her role, Robin was nominated for several awards including the Golden Globe Award for Best Supporting Actress in a Motion Picture and the Screen Actors Guild Award for Outstanding Performance by a Female Actor in a Supporting Role.

In 2013, Robin Wright was cast in what would become one of the most popular political thriller television series, House of Cards, playing Claire Underwood, wife of main character Francis J. “Frank” Underwood, played by award winning actor Kevin Spacey. Complete with actors Kate Mara and Corey Stoll, the series follows the evolution of Frank Underwood’s career in the US government exposing dirty politics in Washington. For her portrayal of Claire Underwood, Robin Wright was nominated for the Primetime Emmy Award for Outstanding Lead Actress in a Drama Series in 2013 and in 2014 won the Golden Globe Award for Best Actress in a Television Series Drama as well as the Satellite Award for the same category.