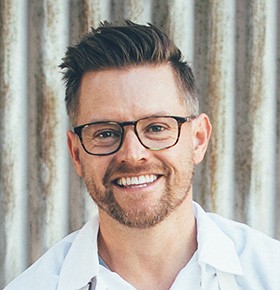 Celebrity Chef speaker for hire Richard Blais is a professional chef who has worked in all facets of the cooking industry. Graduating from the Culinary Institute of America, Chef Blais did his culinary training under world famous chefs including Chef Daniel Boulud at his restaurant Daniel, Chef Thomas Keller at his famous French Laundry restaurant, and Chef Ferran Adria at el Bulli restaurant on the Costa Brava in Catalonia, Spain. Chef Richard opened his flagship namesake restaurant, BLAIS in 2005, followed by Flip Burger Boutique, The Spence and Juniper & Ivy.

Chef Blais is also well-known for competing on season four of Bravo’s reality cooking competition, Top Chef, where he finished in second place, as runner up to Chef Stephanie Izard who won the competition. Throughout the season, Chef Richard was given the golden opportunity to cook for such renowned guest chef judges as Chef Anthony Bourdain, Jose Andres, Sam Talbot, Rocco Dispirito, and Gale Gand. Celebrity Chef Richard Blais returned in 2010 as a contestant on Top Chef: All Stars which featured eighteen former Top Chef competitors returning to compete for a grand prize of $200,000. Chef Blais was victorious over all of the challengers who included Chefs Fabio Viviani, Angelo Sosa, Fan Favorite Carla Hall, and runner up Mike Isabella. Since then, Chef Blais has appeared on a slew of other television programs including competing on Food Network’s series Chopped in its All-Star Competition, host of the Food Network series, “Hungry Games”, and as a guest on national programs such as Good Morning America, NBC’s Today Show, The Talk, the Rachael Ray show, The Chew, and The Dr. Oz Show.

In 2013, celebrity chef for hire Richard Blais released his first cookbook, Try This at Home: Recipes from My Head to Your Plate. The book has received many rave reviews from fellow celebrity chefs including Chef Grant Achatz, Anthony Bourdain, Andrew Zimmern, and famous actress Zooey Deschanel.