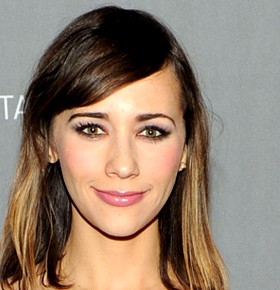 Although she originally wanted to be a lawyer growing up, America sure is glad celebrity speaker Rashida Jones had a change of heart and went into acting, as she has gone on to star in some of the nation’s favorite television programs and movies such as Parks and Rec and the Social Network. The daughter of Quincy Jones and Peggy Lipton grew up in Los Angeles and later attended the prestigious Harvard University where she studied religion and philosophy and was a member of the Hasty Pudding Theatricals, Harvard’s dramatic club.  After graduating in 1997, she began pursuing her acting career and quickly found herself making her professional acting debut in the 1997 mini-series The Last Don. Shortly after, she guest starred as Karen Scarfolli in NBC’s Freaks and Geeks, then earned a role on the Fox drama series Boston Public playing Louisa Fenn. This role opened the door to many film opportunities, as she made her big screen debut in Full Frontal and Now You Know. Not completely satisfied with the direction her career was moving, Jones considered leaving acting to pursue a graduate degree in public policy, until she was offered the role of Karen Filippelli in NBC’s hit comedy series The Office. Jones accepted the role and was a regular cast member for season three, and later returning as a guest star in later seasons. She also played Karen on Saturday Night Live when The Office co-star, Rainn Wilson, hosted in 2007. This role catapulted celebrity speaker Rashida’s acting career as she went on to star in several hits such as I Love You Man, The Social Network, Friends with Benefits, The Big Year, with some of the biggest names in the business like Steve Martin, Jason Segel, Paul Rudd, Andrew Garfield, Mila Kunis and Justin Timberlake. On top of all the major films she starred in, she also landed the role of nurse Ann Perkins in NBC’s Emmy nominated sitcom Parks and Recreation, where she co-stars with famed comedians Amy Poehler and Aziz Ansari.

In addition to acting, celebrity speaker Rashida Jones is an accomplished comic book writer. She created comic book series Frenemy of the State, and in 2009 she sold the screen rights to Universal Pictures and Imagine Entertainment to bring the series to life in a film. Jones is set to co-write the screenplay with writing partner Will McCormack; however, this will not be the Harvard grads first experience writing. In 2012 she co-wrote the film Celeste and Jesse Forever, which she also starred in with Andy Samberg. She has also been published in Teen Vogue magazine, where she worked as a contributing editor, and wrote chapter 36 of her father’s biography Q: The Autobiography of Quincy Jones. On top of all that, she serves as a spokeswoman for Dove and its Dove Nourishing Oil Care Collection and is involved in many political and philanthropic efforts. She has participated in events for Stand Up to Cancer, Peace First, Housing Works, and St. Jude Children’s Research Hospital. She has also campaigned in the last three cycles for Democratic Party presidential candidates, including Barack Obama, traveling to many communities and college campuses to encourage voter registration.