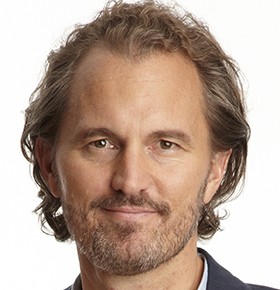 Entrepreneur, nonprofit founder and motivational business speaker for hire Peter Thum is changing the world one bright idea at a time. He has combined his passion for business and sustainability to create powerhouse companies and nonprofits for the greater good of our global society. What’s more, he’s now become a top keynote speaker for business and sustainability events. He can talk about what it takes to create a successful business in addition to finding new avenues to improve the quality of life for those around us.

You might know him best as the founder of Ethos Water which was acquired by Starbucks in 2005. Back in the early 2000’s, Peter was working as a consultant for McKinsey & Company in South Africa. He met many locals in the area who did not have access to safe drinking water and had poor sanitation practices. This was his “Aha Moment” when he found his calling for a greater good outside of his job as a business consultant. Peter developed the idea for a water company that would raise awareness/funding for global safe water programs. He developed his business plan for about a year and left McKinsey in 2002 to start his own venture, Ethos Water. His brand pioneered the idea of linking cause to consumption, which is a model that has been replicated by a number of popular brands including Toms Shoes and Warby Parker Eyewear.

After selling Ethos Water to Starbucks, Peter created a new nonprofit called Giving Water. The nonprofit was built with a similar goal, to provide clean water, sanitation and hygiene education to children in need around the world. But clean water and better sanitation practices was not the end for Peter Thum!

In 2009, he founded Fonderie 47 which converts old assault rifles to jewelry, watches and fashion accessories. The idea was to combat the growing global gun violence and reduce the impact of assault rifles and similar firearms. In 2013, Peter created Liberty United with a similar goal in mind. Liberty United takes illegal guns and shell casings released from Police evidence to create jewelry and fashion accessories. The sales from these products fund programs with a mission to reduce gun violence. Liberty United also gives children access to extracurricular activities such as sports and art classes as well as job training.

Outside of his own endeavors, Peter serves as an advisor to companies and nonprofits. He shares his key insights on venture creation, strategic company growth, marketing and fundraising.