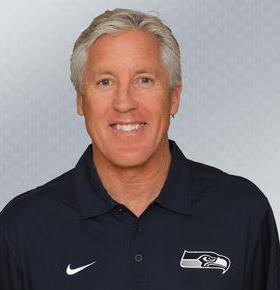 Sports Speaker Pete Carroll is the current head coach of the Seattle Seahawks of the National Football League. While also acting as the Seahawks Executive Vice President of operations, he and his team won the first Super Bowl in franchise history in 2014, and Pete became the first head coach ever to win a Super Bowl in just his 3rd head coaching position in his coaching career. Before finding success in the NFL, Pete was recognized as the spirited head coach of the University of Southern California Trojans whose astounding dominance in college football during Pete’s tenure there is recognized as one of the NCAA’s greatest dynasties. What separates Pete from most coaches in today’s college and professional ranks is his constant commitment to the betterment of his players not only on the field but as humans, as well as dedicating himself to bettering the community around him.

Sports Speaker Pete got his start in coaching as a graduate assistant and would be the defensive coach for several teams including Iowa State, Ohio State, And N.C. State University. In 1984 he got his first gig in the NFL as the defensive backs coach for the Buffalo Bills and would go on to be a defensive coach for several seasons at the Minnesota Vikings and New York Jets. He would finally get his first chance as a head coach with the Jets in 1994 but a tough year would limit his success. He went on to hold several more defensive coaching positions in the NFL including a stint with the New England Patriots under esteemed coach Bill Parcells. Pete accepted the head coaching job at USC in 2001and over his 9-year tenure his teams would go an impressive 97-19, and grab a BCS Championship title in 2005. The team put together one of the strongest runs in NCAA history and went a national record 33 consecutive weeks as #1 atop the Associated Press ranking poll.

Off the field, Pete has started the A Better LA campaign and A Better Seattle campaign, non-profit organizations that target violence in urban areas using community based solutions. He has also created his Win Forever, Always Compete program which is an extension of his book Win Forever designed to help develop a positive team culture with a competitive edge.