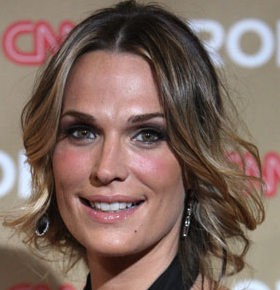 Celebrity speaker Molly Sims is a model, actress, and jewelry designer who broke on to the Hollywood scene after appearing in her first Sports Illustrated Swimsuit issue in 2000. Sims is also has appeared in advertisements worldwide for brands including Jimmy Choo, CoverGirl, Victoria’s Secret, Michael Kors, Chanel, H&M, Armani, Nautica, and was the official spokes model for Old Navy’s “You gotta get this look!” campaign. She has been featured on the covers of British Marie Claire, French Cosmopolitan, French and Spanish Vogue, and Mademoiselle Magazines.

Molly Sims’ career as an actress peaked when she landed the role of one of the main characters, Delinda Deline, on NBC’s popular TV series, Las Vegas. She has appeared in many other roles on both the small screen and the silver screen, including appearances in TV series The Twilight Zone, Atom TV, Royal Pains, and Wedding Band, as well as in films such as The Benchwarmers, Starsky & Hutch, The Pink Panther 2, Fired Up, and Yes Man where she starred alongside celebrity actors Jim Carrey, Bradley Cooper, and Zooey Deschanel.

Throughout her career, Molly Sims has been a featured guest on countless television programs, including The Rachel Zoe Project, Chelsea Lately, Live with Kelly and Michael, The Nate Berkus Show, NBC’s Today Show, Jimmy Kimmel Live!, The Talk, Entertainment Tonight, and Project Accessory.

With a strong background in the fashion industry and savvy sense of style, Molly Sims developed her own jewelry collection called Grayce by Molly Sims. She launched the jewelry line in 2004 which was available through HSN, Henri Bendel, Scoop, Ron Herman, and Matches London but is now sold exclusively through HSN.