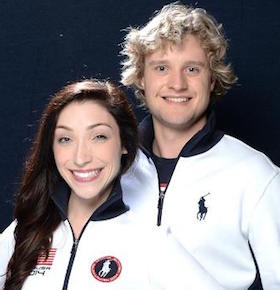 Meryl Davis and Charlie White are American professional ice skaters that ice danced their way into Olympic history and American hearts at the 2014 Winter Olympic Games in Sochi, Russia. The skating pair helped lead the U.S. skating team to a bronze medal in the team competition and won the gold medal in the ice dancing competition, the first ever gold medal in the event for the United States. The skaters have dominated ice dancing competitions in recent years with 6-straight U.S. National championships and 5-stright Grand Prix Final gold medals. Their performance at the 2014 Olympics helped set world records in points for the short dance, free dance, and total combined score.

Sports Speakers Meryl and Charlie first skated together at the ages of 9 and 8 respectively, and little did they know the impact they would have on the sport of ice dancing. They would win the U.S. Junior Championships in 2006 and make the world team the following year in their first year on the senior tour. In 5 appearances at the Four Continents Championships the duo would earn two silver and 3 gold medals. They have also earned 2 silvers and 2 gold medals at the World Championships since 2010.

The skating duo has garnered much media attention as well as opportunities for endorsement and sponsorships along their journey to Olympic Gold. Meryl and Charlie joined a host of U.S. Olympians that were a part of the Procter & Gamble Thank You Mom campaign and appeared on a special-edition Kellogg’s Corn Flakes box. The two skaters also have sponsorships from Puffs facial tissues, Ralph Lauren, VISA and Airweave mattresses. Before the 2014 Olympics, Meryl and Charlie appeared in the NBC special How to Raise an Olympian alongside other popular American Olympians including Mikaela Shiffrin and Lindsey Vonn.