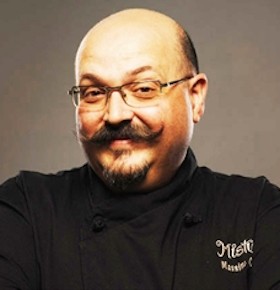 Celebrity Chef Speaker Massimo Capra is an Italian chef, restaurant consultant, and television personality. He is known for his frequent appearances on Restaurant Makeover and his famous restaurants.

During Capra’s youth in Cremona, Italy, he developed an interest in food while helping his mother cook and working on his father’s garden. Capra went on to attend the National Culinary Institute in Salsomaggiore, Parma, and after serving in the Army, Capra was hired at the Trattoria dell’ Amalia in Mestre, Venice; this restaurant was considered one of the best in Italy at the time. After working there, he spent a number of years cooking in luxury hotels, including the famous Excelsior Gallia Hotel in Milan. In 1982, Capra decided to work overseas, taking a job at Archer’s, a restaurant in Toronto. Capra worked at Archer’s for seven years, and then took a job at Prego Della Piazza in Yorkville, Toronto. Preggo became very popular with A-list actors attending the Toronto International Film Festival while Capra worked there. After nearly ten years cooking at Preggo, he teamed with Paolo Paolini to form the Mistura restaurant, which offers a delicious contemporary Italian menu. Capra also launched Sopa Upper Lounge above the Mistura restaurant, one of Toronto’s most exclusive event venues. In 2010, Capra partnered to launch Fraticelli’s Italian Grill & Lounge in Ontario, as well as starting the Rainbow Room, a spectacular restaurant situated directly across from the Niagara Falls.

Celebrity Chef Speaker Massimo Capra appeared on 12 episodes of the show Restaurant Makeover on HGTV Canada, which currently airs reruns on many channels, including the Food Network Canada, HGTV Canada, the Fine Living Channel, and Food Network in the United States. In addition to these appearances, he has also served as a regular guest expert on City TV Cityline, and he has appeared on several cooking shows, including The Beer Buddies, The Movable Feast, and Buddies of the Vine.  Capra contributes a monthly column in the Globe and Mail’s New Life section. He also serves as brand ambassador for Samsung Home Appliances and Buitoni pizza. Capra has published two cookbooks, One Pot Italian and Massimo’s Italian Kitchen. In 2012, he partnered with Toronto Pearson to form Boccone Trattoria, a restaurant offering fresh, rustic Italian cuisine in Ontario.