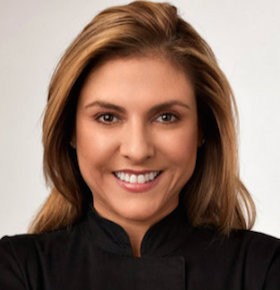 Celebrity Chef Speaker Lorena Garcia has become one of today’s most popular celebrity chefs with her successful string of restaurants, cookbooks, and her successful Cantina Bell menu that has become so popular at Taco Bell. The talented master of Latin cuisine and her recipes have been featured in publications such as People, Saveur, Cosmopolitan and Vogue magazines while a number of her recipes culminated in the publication of her own cookbook in 2011 titled Lorena Garcia’s New Latin Classics: Fresh ideas for Favorite Dishes. Lorena has taken her personal brand a step further with the introduction of her own line of kitchenware products that are functional and feature chic, stylish colors and designs.

Before becoming a popular Latin food whiz in America, celebrity chef speaker Lorena was featured as the host of a number of Spanish TV shows including work on the popular network Telemundo, and she recently appeared on Bravo’s Top Chef spin-off Top Chef Estrellas on Telemundo in early 2014. She opened her first 2 restaurants in Miami in 2002 called Food Café and Elements Tierra and is one of the leading chefs working to create healthy and tasty food options at airports around the country. After opening her own chain of airport restaurants called Lorena Garcia Cocina in Atlanta, Miami, and Dallas. Her success in airport dining led her to become a menu and recipe development consultant for HMS Host, a leading company in food, beverage, and retail for travelers. Her commitment to creating healthier food choices is exemplified through the work of her non-profit program called Big Chef, Little Chef that helps children and their families make better choices for a healthier lifestyle. Lorena has also recently partnered with P.A.N. (Productos Alimenticios Nacionales), the number one pre-cooked cornmeal brand in Venezuela, to be the ambassador to spread the product to the United States.

Lorena became a familiar face to the public after her many appearances on Bravo Network shows including an appearance as a guest judge on Top Chef All-Stars, and as a contestant on the 4th season of the Top Chef Masters series in 2012. She would cook her way to a strong 3rd place and 2nd place overall in money earned. She appeared as a chef mentor on NBC’s The Biggest Loser and has appeared on many popular talk shows such as The Today Show, Queen Latifah, and the special CNN documentary Latinos in America.